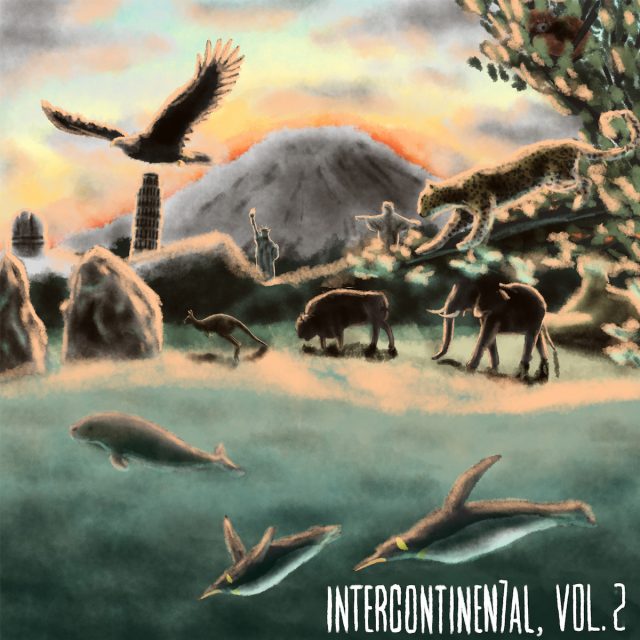 Intercontinen7al take you around the world again with their adventurous and exploratory sophomore album Vol. 2 — premiering exclusively on Tinnitist.

What began in 2020 as a sonic experiment of recording music virtually among local bandmates in Maryland continues to evolve into a worldwide collaboration. Intercontinen7al — featuring musicians from all seven continents — created 11 original songs for Vol. 2 to prove once again that music can not only survive but thrive in these pandemic times. The album includes the track Puerto Aisen, which is the second original composition in history to feature tracks recorded across every continent (the first was the band’s debut album closer Manor Hill). Once again, the band will donate all proceeds to charity, this time supporting the International Justice Mission and their fight against human trafficking and slavery. The goal of Intercontinen7al is to support a different cause with every album.

That summer, Matt was walking when an idea struck him like a lightning bolt: What if the band adopted Foo Fighters’ Sonic Highways concept (recording with artists from several cities in the U.S.), but expanded it to include every continent to participate. Intercontinen7al was born, with the 7 inspired by the Tool song 7empest.

For the remaining musicians, the band contacted friends, former bandmates and family members who were fellow North American musicians (like bassists Devin Heritage and Alex Burke), and used BandLab to establish additional musician connections (including guitarist Josh Pearlson of Africa). The band also reviewed musicians’ profiles and comments to recruit other participants, such as Nerse of Asia. Europe is represented by musicians such as Poland’s Marcin Nawrocki, who was recruited after flagging one of the band’s song ideas for potential collaboration, and the talented vocalist Rieneke from the Netherlands. To recruit the two musicians from Antarctica, Matt contacted numerous active research stations in September 2020 to determine if there were researchers that happened to be musicians on site, and successfully recruited Aymar de Lichervelde and Stijn Thoolen.

Following the release of their debut record, the band continued to expand in 2021, adding such talented artists such as Andrasta, Bubbas Bentlass and Darren Fellows from the United Kingdom, Jukerok from Egypt, Manuelonics from Africa, Miami73 from France, Masanobu Takano and Ken Ichiro Tashiro from Japan, and Rousevision from Germany. The second record expands the scope of genres covered by the band, with songs ranging from jazz, folk, Latin, pop, rock, blues, funk, metal, and show tunes. All 28 band members from Vol. 2 are listed below. The band is already working on ideas for Intercontinen7al III, slated for release in the fall/winter of 2022.

Listen to Vol. 2 and watch a preview of the Puerto Aisen video below, donate to their cause HERE, and keep up with Intercontinen7al at their website, Twitter, Instagram and TikTok.