Home Read Asking Alexandria | Like A House On Fire 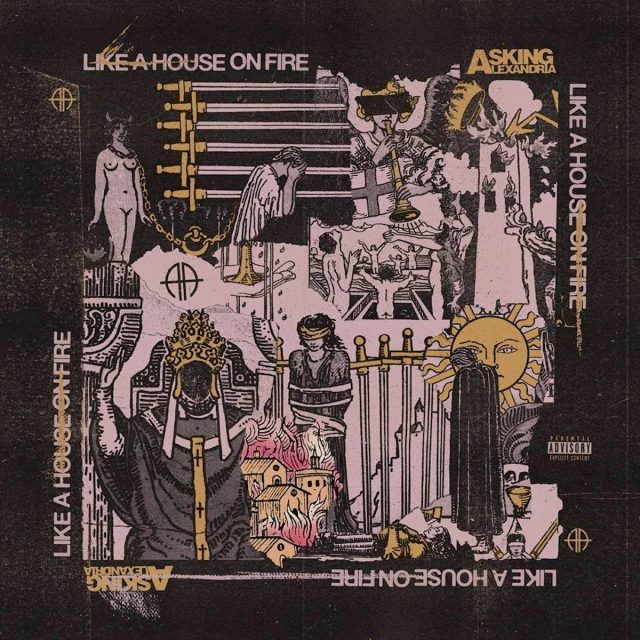 Asking Alexandria are one of those bands that people seem to either love with a passion or hate with a vengeance. Can’t say I care that much either way — though I’d probably have to lean just a little toward the thumbs-downers. Or at least I would have until I heard the Yorkshire bruisers’ sixth album Like A House On Fire. Which is not to say they’ve won me over. More like they’ve left me scratching my head. On the one hand, some of these songs are so hooky and commercial they barely qualify as metal (and don’t even come close to metalcore). In fact, sometimes I thought I was listening to a slightly heavier version of Fall Out Boy. That’s not a slam: I happen to like Fall Out Boy. Equally telling: Every time my finger began to inch toward the skip button, they managed to drop a riff or a hook or a vocal line or some other nifty sonic tidbit to brush me back off the plate. So on the whole, it’s going to take me a few more listens before I decide whether I truly like this or not. And in my book, that makes Like A House on Fire distinctive and different enough to get a thumbs-up — for now, anyway.

THE PRESS RELEASE: “Since 2008, Asking Alexandria have paved a path of their own, distilling danger and excess into an equally dangerous hybrid of stadium rock ambition, metallic energy, and electronic ecstasy. Fanning the flame like never before, the quintet — Ben Bruce [guitar, backing vocals], Danny Worsnop [lead vocals], James Cassells [drums], Cameron Liddell [guitar], and Sam Bettley [bass] — burn even brighter on their 2020 sixth full-length, Like A House On Fire. “We don’t take the easy road,” exclaims Ben. “We take the difficult road that leads to something spectacular. That’s how we’ve always been. When we were kids, we moved to America with no money and lived in a carpark to make this happen. Obviously, we’ve had a turbulent past and history, from drugs and alcohol to Danny’s departure and return. So, it feels like every album we hear the same thing, ‘You guys need to prove yourselves again!’ We spent 10 years growing the most insane fan base though. We did this album for us and our fans. That’s it. We’re still here. We’re not going anywhere. We don’t have anything to prove. This time, we said, ‘Fuck you. We’re doing this our way’.” By blazing their own trail, Asking Alexandria might ultimately encourage others to do the same. “At the end of the day, I don’t care who you are, no one wants to be told what to do , where to go, what to think, or what job to have,” he leaves off. “Everyone wants to live life to the fullest. The album touches on that. We wrote the record we wanted to write and had a fucking blast doing it. I hope this can be inspiring. We’re brothers playing for our lives. That doesn’t go away. It can get bigger or smaller, but we’re here forever. We’re super thankful.”