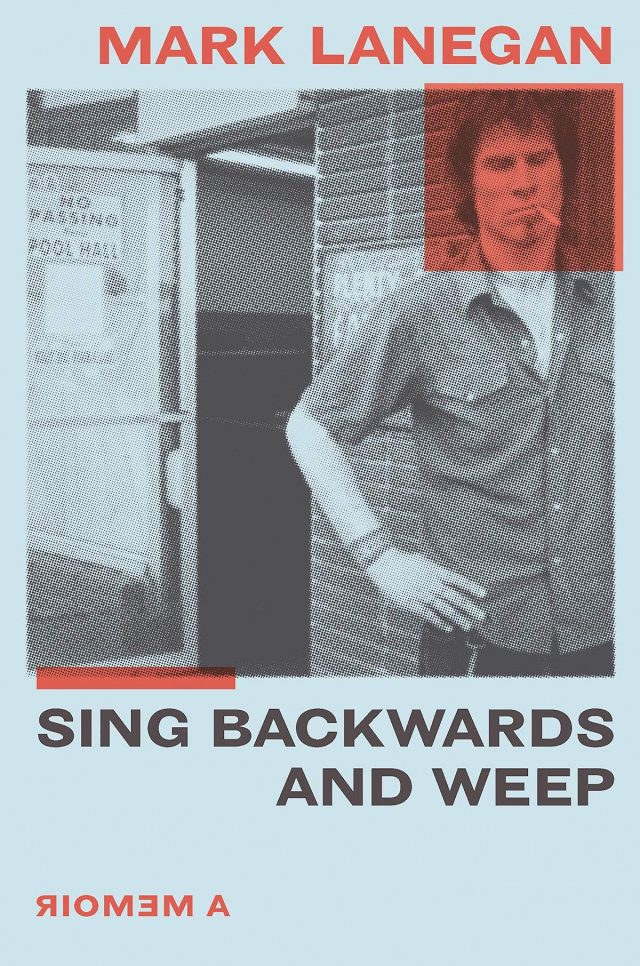 Dark Mark and Fiddy tell all, Bix Beiderbecke and Joe Cocker get the picture, Toto get rounded up, and rumours of Paul McCartney’s death are greatly exaggerated. And those are just some of the latest literary options for music fans. Scroll down to see the rest — but be sure to leave a copy of the Lanegan book for me, would ya? 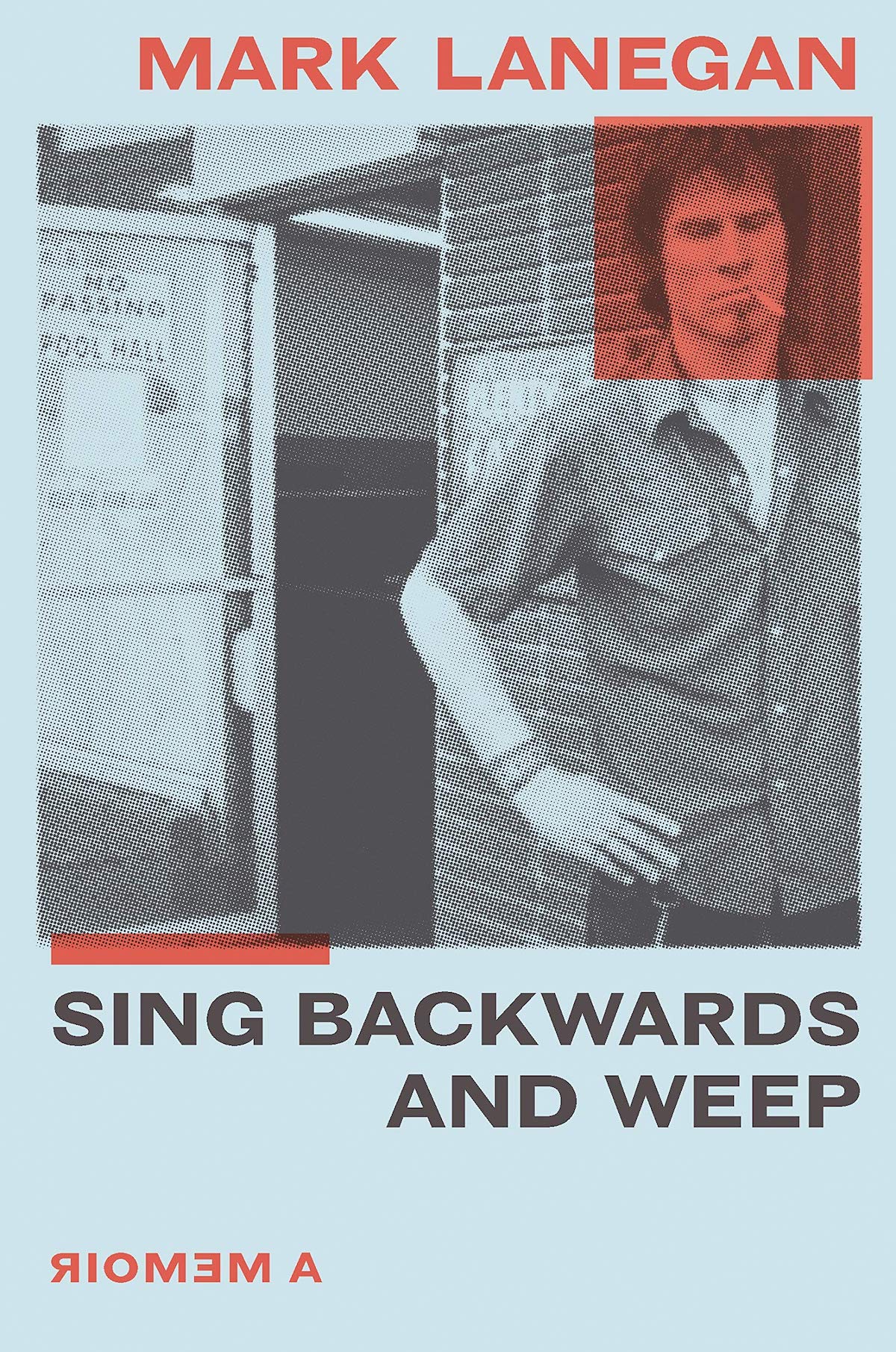 Sing Backwards and Weep: A Memoir
By Mark Lanegan

THE PRESS RELEASE: “When Mark Lanegan first arrived in Seattle in the mid-1980s, he was just “an arrogant, self-loathing redneck waster seeking transformation through rock ‘n’ roll.” Little did he know that within less than a decade, he would rise to fame as the front man of the Screaming Trees, then fall from grace as a low-level crack dealer and a homeless heroin addict, all the while watching some of his closest friends rocket to the forefront of popular music. In Sing Backwards and Weep, Lanegan takes readers back to the sinister, needle-riddled streets of Seattle, to an alternative music scene that was simultaneously bursting with creativity and dripping with drugs. He tracks the tumultuous rise and fall of the Screaming Trees, from a brawling, acid-rock bar band to world-famous festival favorites that scored a hit #5 single on Billboard‘s Alternative charts and landed a notorious performance on David Letterman, where Lanegan appeared sporting a fresh black eye from a brawl the night before. This book also dives into Lanegan’s personal struggles with addiction, culminating in homelessness, petty crime, and the tragic deaths of his closest friends. From the back of the van to the front of the bar, from the hotel room to the emergency room, onstage, backstage, and everywhere in between, Sing Backwards and Weep reveals the abrasive underlining beneath one of the most romanticized decades in rock history-from a survivor who lived to tell the tale. Gritty, gripping, and unflinchingly raw, Sing Backwards and Weep is a book about more than just an extraordinary singer who watched his dreams catch fire and incinerate the ground beneath his feet. Instead, it’s about a man who learned how to drag himself from the wreckage, dust off the ashes, and keep living and creating.” 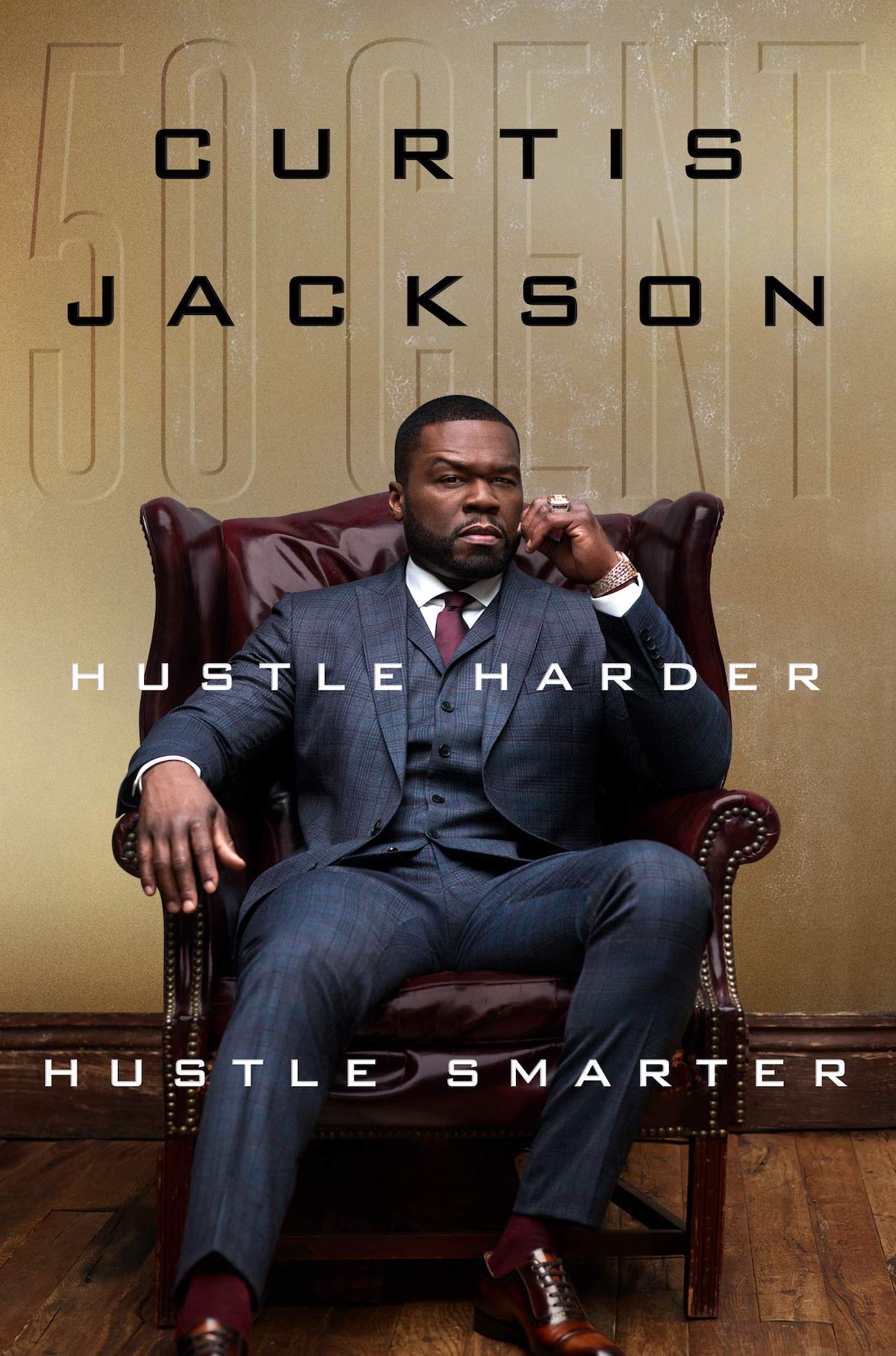 THE PRESS RELEASE: “For the first time, Curtis “50 Cent” Jackson opens up about his amazing comeback ― from tragic personal loss to thriving businessman and cable’s highest-paid executive ― in this unique self-help guide, his first since his blockbuster New York Times bestseller The 50th Law. In his early 20s Curtis Jackson, known as 50 Cent, rose to the heights of fame and power in the cutthroat music business. A decade ago the multi-platinum selling rap artist decided to pivot. His ability to adapt to change was demonstrated when he became the executive producer and star of Power, a high-octane, gripping crime drama centered around a drug kingpin’s family. The series quickly became “appointment” television, leading to Jackson inking a four-year, $150 million contract with the Starz network ― the most lucrative deal in premium cable history. Now, in his most personal book, Jackson shakes up the self-help category with his unique, cutting-edge lessons and hard-earned advice on embracing change. Where The 50th Law tells readers “fear nothing and you shall succeed,” Hustle Harder, Hustle Smarter builds on this message, combining it with Jackson’s street smarts and hard-learned corporate savvy to help readers successfully achieve their own comeback ― and to learn to flow with the changes that disrupt their own lives.” 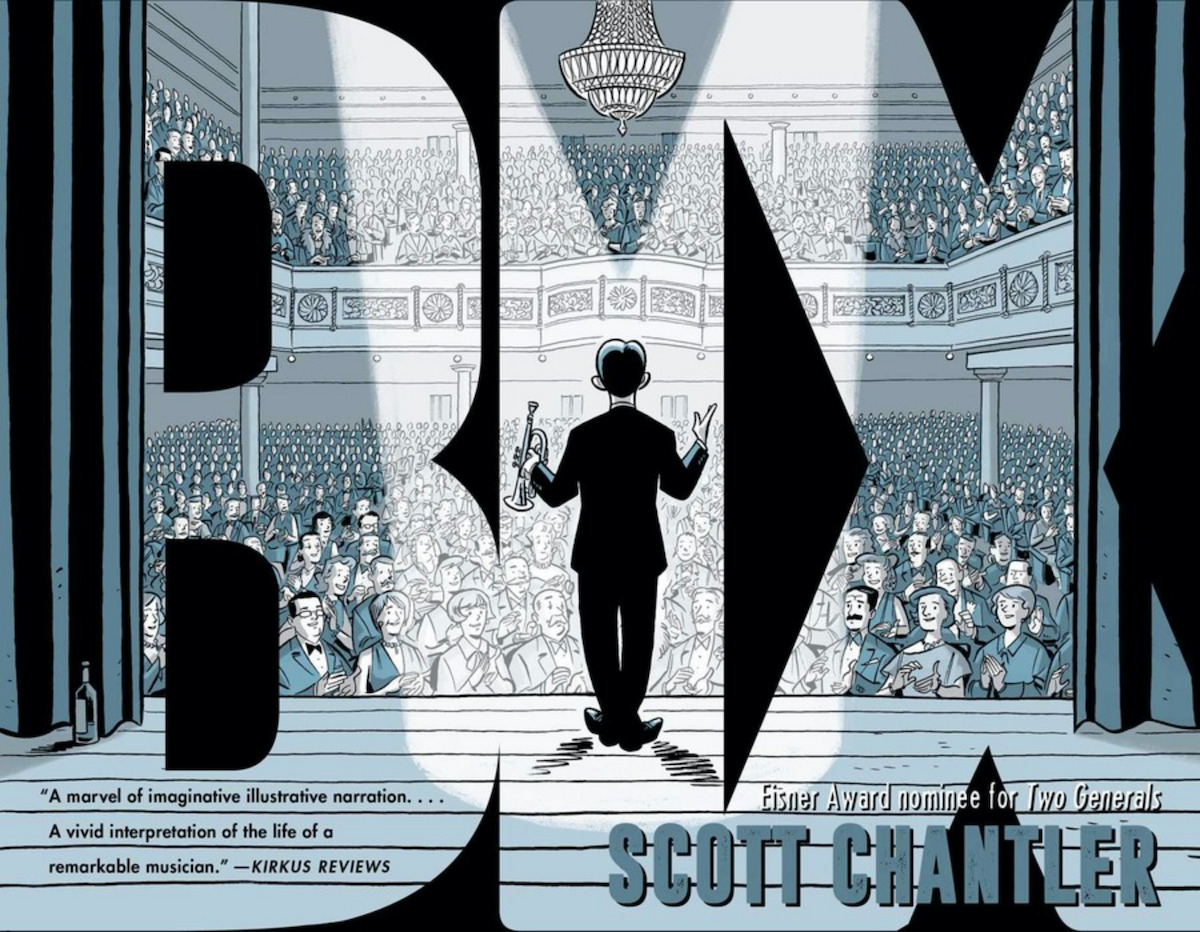 THE PRESS RELEASE: “From the acclaimed Eisner Award–nominated creator of Two Generals and Northwest Passage comes a gorgeous and spare illustrated exploration of the rapid rise and tragic fall of 1920s legendary jazz soloist Leon “Bix” Beiderbecke. Told in stunning illustrations, Bix is a near-wordless graphic biography highlighting the career of Beiderbecke, one of the most innovative jazz soloists of the 1920s next to the legendary Louis Armstrong. Composing and recording some of the landmark music in the early history of genre, Bix struggled with personal demons, facing the disapproval of his conservative parents and an increasing dependence on alcohol. Told mostly in silent panels to reflect his outsider quality and inability to communicate in anything other than musical terms, Bix tells the story of the rapid rise and tragic fall of a musical legend — a metaphor for the glories and risks inherent in the creative life.” 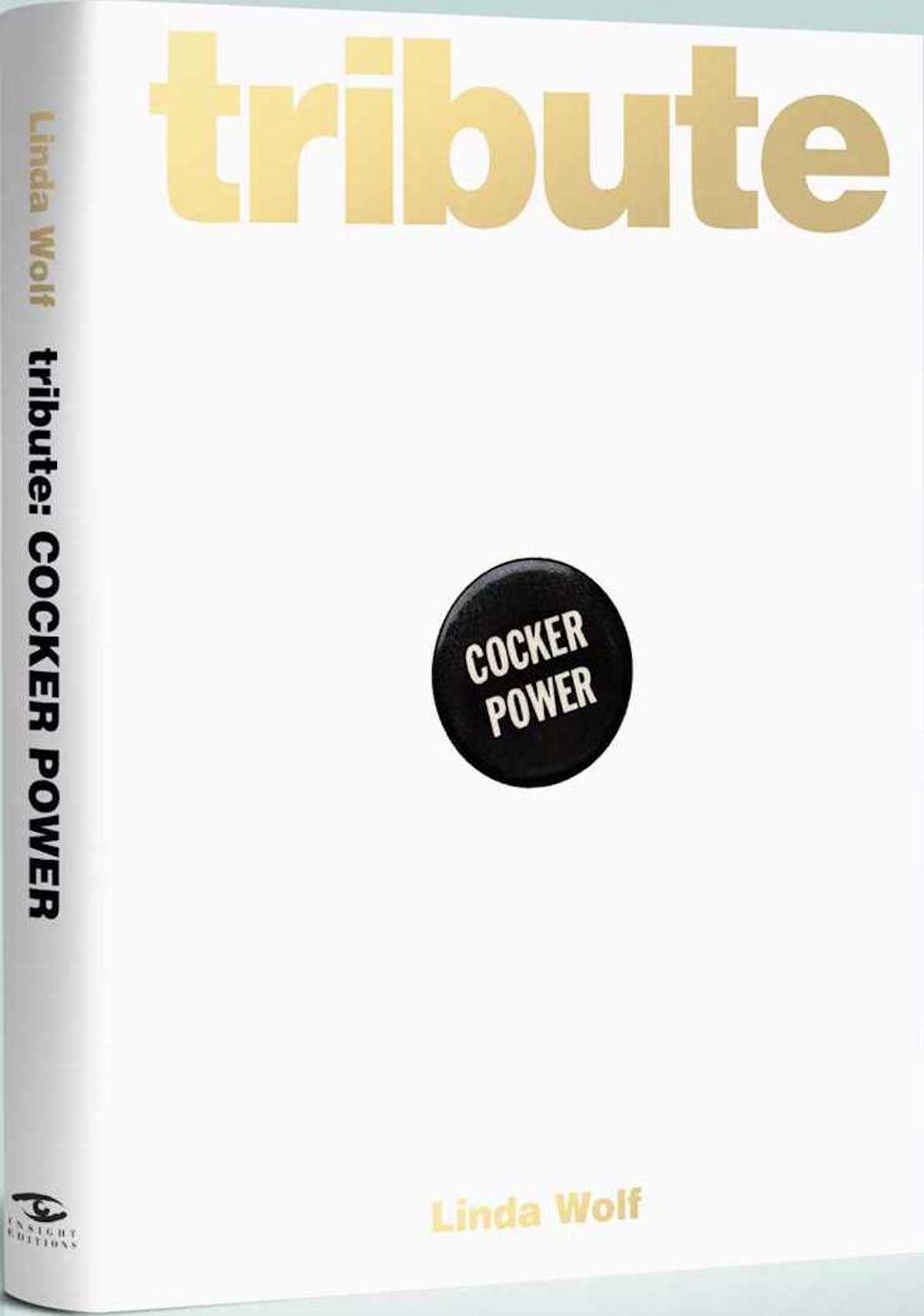 THE PRESS RELEASE: “Tribute: Cocker Power features exclusive, never-before-seen documentary photos, stories, and vignettes from both the Joe Cocker Mad Dogs & Englishmen Tour, which has been called one of the greatest rock-and-roll tours of all time, and the 2015 tribute concert at the Lockn’ Festival with Tedeschi Trucks Band and the original tour alumni. This visually stunning volume includes contributions from over one hundred musicians and crew members, including Leon Russell, Chris Stainton, Rita Coolidge, Claudia Lennear, Derek Trucks, and many more. A true labor of love to all who played a part in these exceptional times in the history of music and culture, and to everyone, collectively, who played their part in making it all happen, Tribute: Cocker Power is a must-have for devoted fans and newcomers alike.” 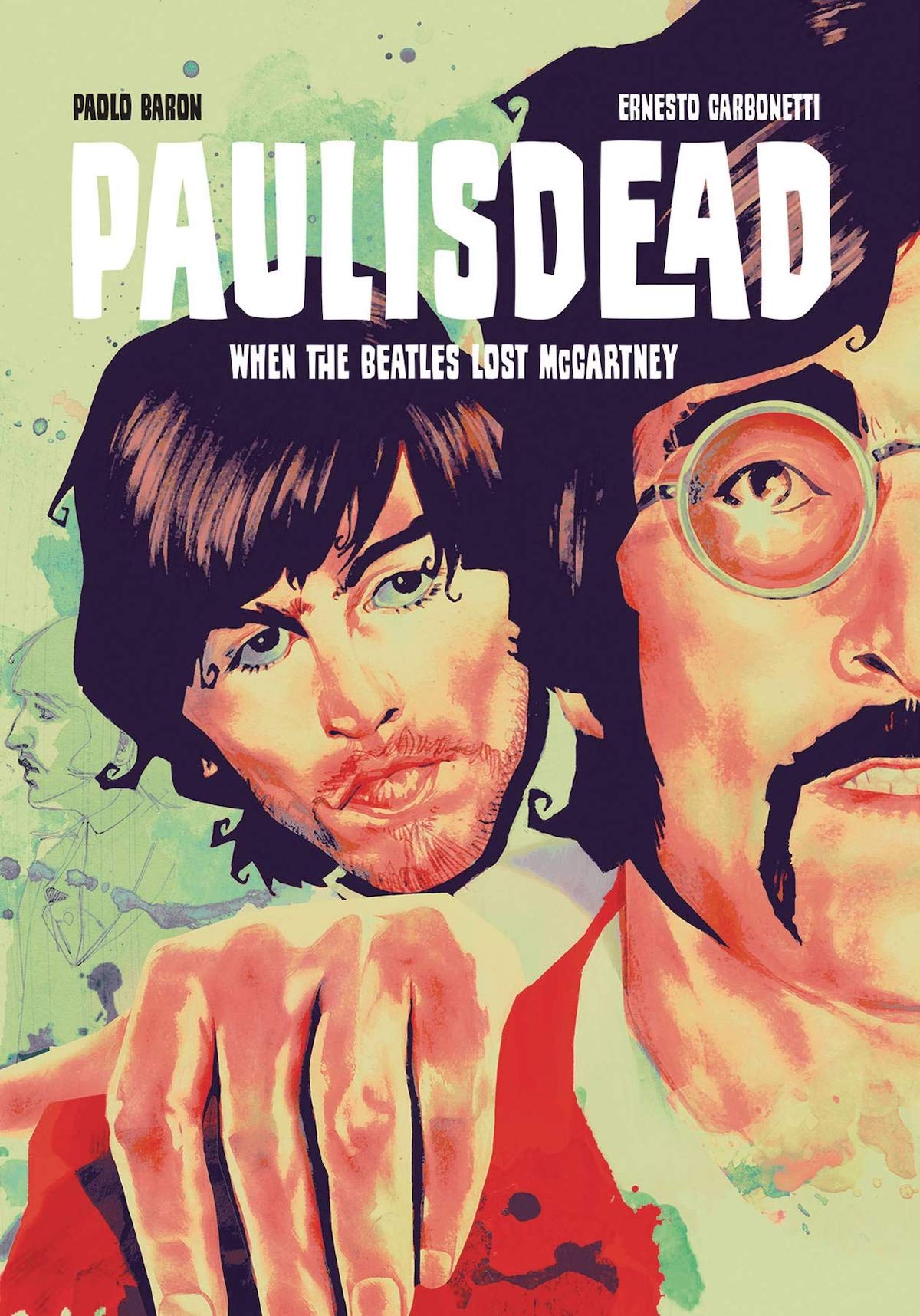 THE PRESS RELEASE: “London, November 1966. John Lennon can’t speak, he can’t take his eyes off a photo of a car in flames with the body of Paul McCartney inside. His friend is no longer there, and that means The Beatles are no longer there, either. But John wants to know the truth, and with George and Ringo, he starts to re-examine the final hours in Paul’s life. Set in the magical atmosphere of Abbey Road Studios during the writing sessions for Sgt. Pepper, the definitive version of the legend of the Paul McCartney’s death.” 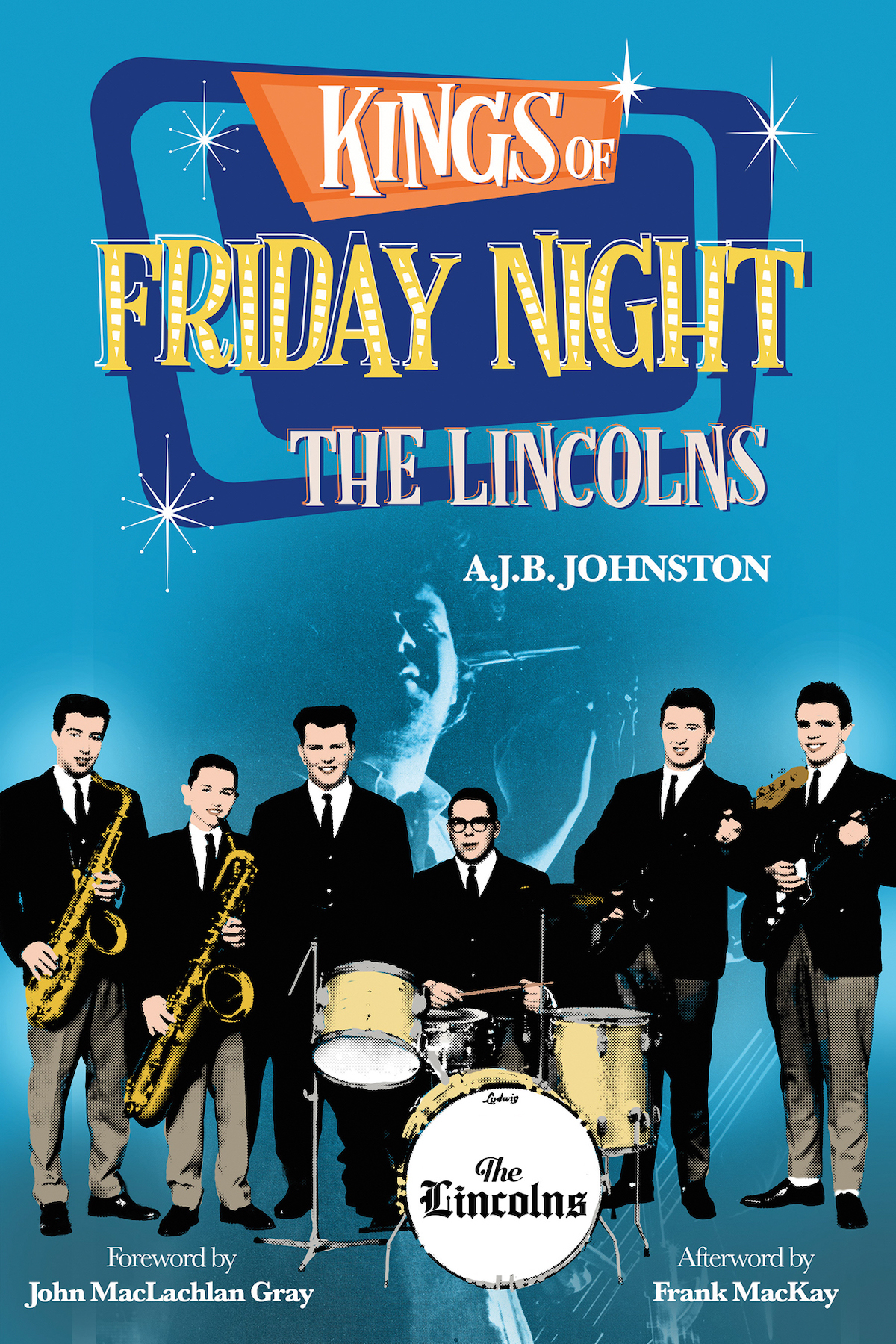 Kings of Friday Night: The Lincolns
By A.J.B. Johnston

THE PRESS RELEASE: “Early 1960s Truro, Nova Scotia, was a town divided: East/West, Protestant/Catholic, Black/White. Only one thing brought everyone together: a Lincolns dance. Over a span of ten years, Truro’s legendary “kings of Friday night” played their trademark rock ‘n’ roll, R&B, and soul, not just in Truro but at dances and on campuses from Yarmouth to Sydney, Nova Scotia, and north to Sackville, Moncton, and Saint John, New Brunswick. In the process, The Lincolns changed the lives of small-town kids clamouring for a beat that would move their feet, their hips — and ultimately, their hearts. Award-winning author A.J.B. Johnston brings personal recollections and nostalgic delight to the tale of Truro’s unforgettable rock stars. Through interviews and first-person stories, and featuring photos of the band’s evolution, The Lincolns will stir fond memories for the band’s countless loyal fans. Featuring a foreword by John MacLachlan Gray and an afterword by Frank MacKay.” 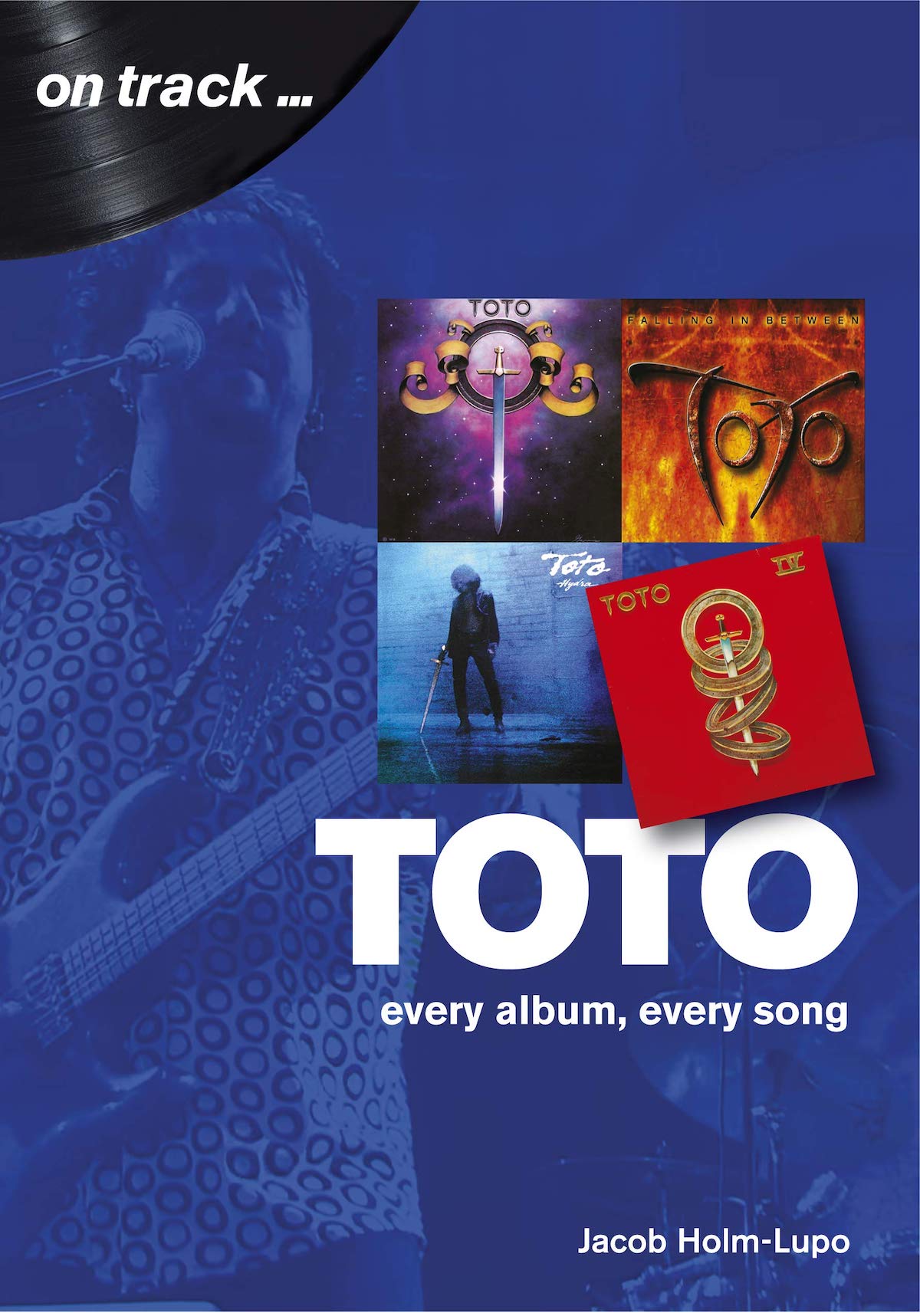 Toto: Every Album, Every Song
By Jacob Holm-Lupo

THE PRESS RELEASE: “Turn on the radio anytime, anywhere in the world, and sooner or later you will hear Africa. Along with just a handful of songs by artists and groups like Michael Jackson and The Beatles, Toto’s Africa is one of the most ubiquitous musical works of our time. It was written by a group of session musicians who grew up together in Los Angeles’ San Fernando valley. Together they helped define the sound of the late ’70s and ’80s, appearing on numerous hit records by Michael Jackson, Boz Scaggs and Steely Dan. But it was together, as Toto, that they found their true form, fashioning a fine blend of funk, hard rock, pop and progressive rock that has enamoured millions of record buyers since their debut in 1978. Hold the Line, Rosanna and Stop Loving You are just a few of their other iconic hits. At the same time, their success came at a price. From the early days, Toto were a target for the music press, who disdained their anti-image, their slick chops and polished sound — all at odds with the post-punk and new wave aesthetics prevalent at the time. Yet Toto have always persevered, driven by their love for the music — and their fans’ love for them. Lately Toto has been riding a renewed wave of popularity, not to mention a belated restitution from the rock media.” 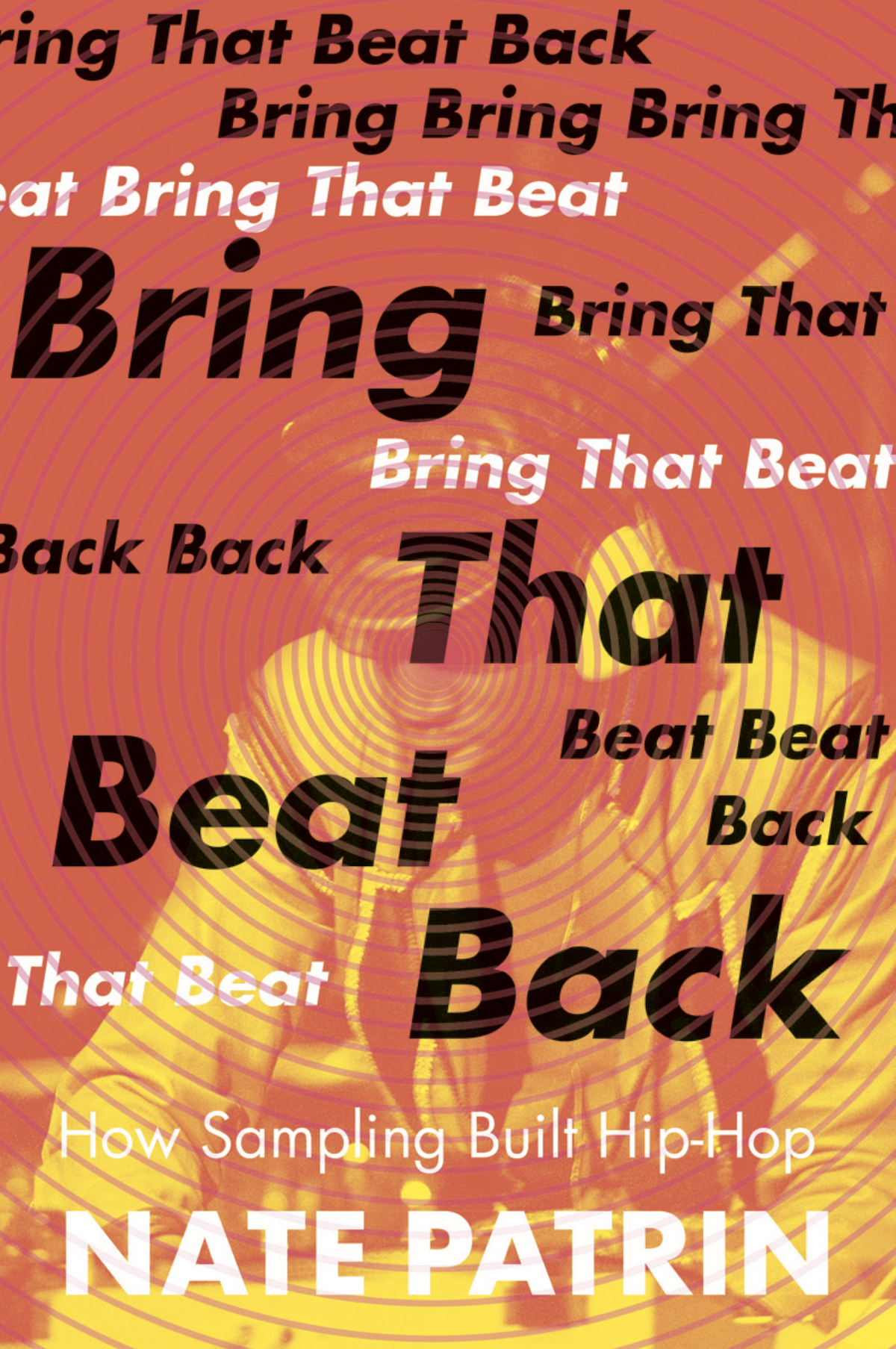 Bring That Beat Back: How Sampling Built Hip-Hop
By Nate Patrin

THE PRESS RELEASE: “Sampling — incorporating found sound and manipulating it into another form entirely — has done more than any musical movement in the 20th century to maintain a continuum of popular music as a living document and, in the process, has become one of the most successful (and commercial) strains of postmodern art. Bring That Beat Back traces the development of this transformative pop-cultural practice from its origins in the turntable-manning, record-spinning hip-hop DJs of 1970s New York through forty years of musical innovation and reinvention. Nate Patrin tells the story of how sampling built hip-hop through the lens of four pivotal artists: Grandmaster Flash as the popular face of the music’s DJ-born beginnings; Prince Paul as an early champion of sampling’s potential to elaborate on and rewrite music history; Dr. Dre as the superstar who personified the rise of a stylistically distinct regional sound while blurring the lines between sampling and composition; and Madlib as the underground experimentalist and record-collector antiquarian who constantly broke the rules of what the mainstream expected from hip-hop. From these four artists’ histories, and the stories of the people who collaborated, competed, and evolved with them, Patrin crafts a deeply informed, eminently readable account of a facet of pop music as complex as it is commonly underestimated: the aesthetic and reconstructive power of one of the most revelatory forms of popular culture to emerge from postwar twentieth-century America. And you can nod your head to it.”