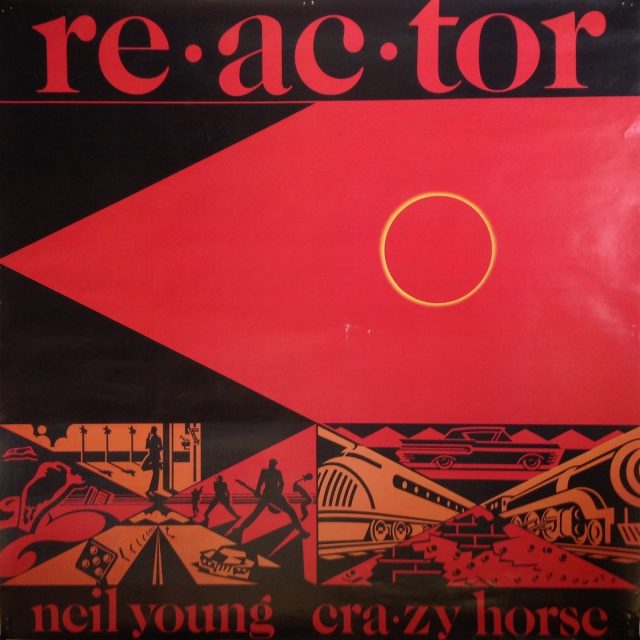 I saw Neil Young was shooting his mouth off in the media again today. Figured that was as good an excuse as any to show off this large Re•ac•tor poster I’ve had in my collection ever since the album came out back in 1981. And since Neil never refrains from saying what’s on his mind, here’s my two cents on him:

Near as I can tell, Young seems to be one of those artists that most people either worship unconditionally or loathe completely. It’s not nearly so cut-and-dried with me. As a musician and a songwriter, he has repeatedly earned my respect (albeit sometimes grudgingly) with his unwavering commitment to follow his muse whenever it hits and wherever it leads, even if he ends up shooting himself in the foot commercially, artistically or personally in the process. Of course, there’s a flip side to that coin, and it comes down to this: A lot of the time, Neil seems like kind of a dick. Or at least a guy who lives in a self-important bubble zealously guarded by dicks.

Case in point: Years ago, I was reviewing one of his theatre shows — where he was charging the fucking outrageous sum of $270 for a 90-minute set, BTW — and nearly got thrown out by his goon squad because they claimed I could bootleg the show on my Blackberry (despite the fact I was in the back row, behind a few thousand people with iPhones). Another time at the Grammys, he stood right in front of me in a red-carpet line while I was holding a sign that read “I’m from Winnipeg — talk to me!” Which, of course, he didn’t. No surprise there: Despite countless interview attempts over the decades, he’s never deigned to speak to me.

But honestly, it’s not about my bruised ego; from where I sit, Young basically acts like a selfish ass to nearly everybody. There’s that old 1970s video of him haranguing some poor record store clerk after Neil found a bootleg of himself in the store. There’s the way he’s injected himself into Canadian and American politics for decades, even though he hasn’t lived in Canada since the ’60s, didn’t become an American citizen until this year and admits he’s never voted. There’s the way he continually treats his fans like an ATM with absurd ticket prices, then tells them not to clap or sing along in concert. The way he starts grand projects like Pono, gets people to invest financially and emotionally, then abandons them. The way he … ah, never mind. Like I said, you either love Neil or you hate him. So you either think I’m right on or full of shit. And either way, nothing is gonna change your mind. I’ll save my breath and get back to this poster:

It’s a big mother, about 36″x36″. And aside from a wee little divot right there in the middle, it’s in surprisingly decent shape, considering it was on my wall for a generation or so. I can’t say Re•ac•tor is my favourite album — though when you put it next to Trans and some of his other experiments at the time, I guess it fares a little better. If you have a higher opinion of this album (or Neil) than I do, maybe you’d like to get this sucker on your wall. Email me and we can make it happen. Unless, of course, Neil’s goon squad descend on me first to claim it really belongs to him.