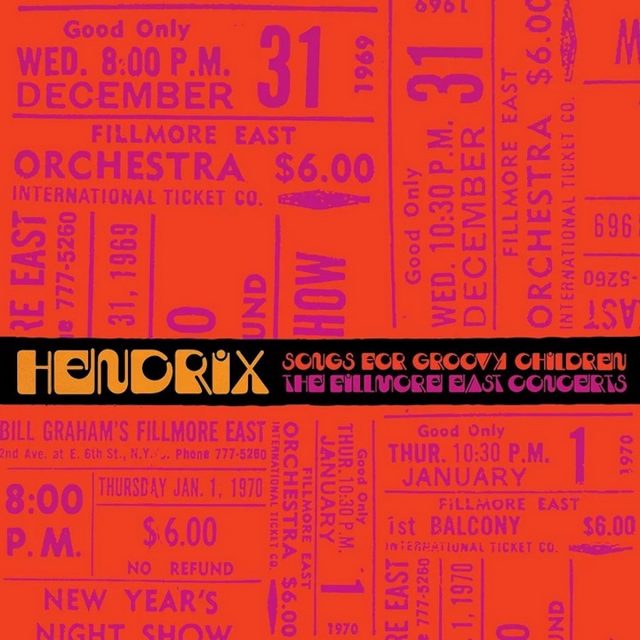 WHO IS HE? Seattle’s favourite rock ’n’ roll son until the arrival of Kurt Cobain. The guy who wanted you to stand next to his fire and excuse him while he kissed the sky. The first guitarist to set his axe on fire onstage (literally and figuratively). One of the charter members of rock’s 27 Club. And, most importantly, the most iconic, innovative and influential guitar player between Les Paul and Eddie Van Halen — accompanied here by his short-lived latter-day Band of Gypsys featuring old Army buddy Billy Cox on bass and thundering groovemaster Buddy Miles on drums.

WHAT IS THIS? The fifth — yes, fifth — different package to contain music from the band’s legendary New York City shows on New Year’s Eve 1969 and New Year’s Day 1970. Thankfully, this is the first (and hopefully last) version to serve up the whole enchilada: All 43 songs played during the four shows, presented in sequence and without edits (for better and/or sometimes worse). That list includes a handful of cuts that have never been officially released until now, along with some that only appeared in concert footage and others previously issued in edited versions.

WHAT DOES IT SOUND LIKE? Something that should (and could) have been issued nearly half a century ago. Especially since the bootlegs have been around almost that long. Sound-wise, the set — helmed as always by eternal Hendrix producer, musical wingman and torchbearer Eddie Kramer — purports to have been remastered and remixed, but honestly sounds about the same as previous releases.

WHAT SHOULD IT BE TITLED? Can’t Have More Fillmore. Too Much Too Late. Though really, About Goddamn Time would probably be the best.

WHEN SHOULD I LISTEN TO IT? When you have plenty of time to spare — the full set lasts more than five hours. If you’re truly a superfan, you could line it up so the New Year’s Eve set wraps up at the stroke of midnight. Though really, that seems kind of sad.

WHAT ARE THE BEST SONGS? Previously unreleased versions of Hey Joe, Purple Haze, Lover Man, Steal Away, Changes, Message to Love and Stop — if only for the fact you might not have heard them countless times before.

WHAT WILL MY FRIENDS SAY? ‘This is good and all — but not really worth waiting five entire decades. Besides, it makes me wonder: What’s the catch? Is there a 5.1 version coming next year? Or a full video of the entire box?’

HOW OFTEN WILL I LISTEN TO IT? About as often as you spin the other Band of Gypsys and Fillmore releases.

IF THIS ALBUM WERE A COUNTRY SUPERSTAR, WHO WOULD IT BE? Garth Brooks — another artist whose fans have been forced to buy the same music repeatedly in order to get small amounts of new material.

SHOULD I BUY, STREAM OR STEAL IT? Granted, fans will shelling out yet again for songs they’ve already bought multiple times. But perhaps they can defray the cost slightly by hawking previous releases at the used record store.