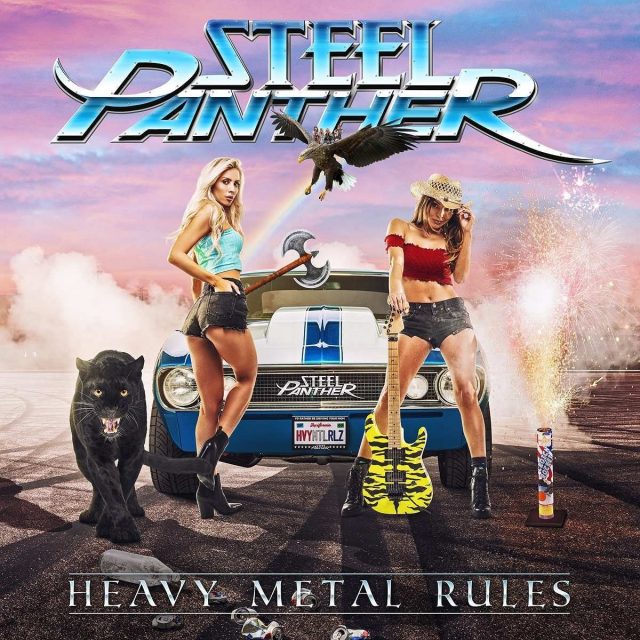 WHO ARE THEY? The last hair-metal hedonists still standing. The sleaziest sluts on the Sunset Strip since Mötley Crüe. And the men singlehandedly consuming 99% of the world’s supply of zebra-striped Spandex and leopard-spotted Lycra.

WHAT IS THIS? Their fifth full-length ode to partyin’, fuckin’, and fuckin’ partyin’, brah.

WHAT DOES IT SOUND LIKE? Every bit as gleefully stupid as their other four albums. What, you thought Steel Panther were going to mature as songwriters and embrace the MeToo movement? Not on your Aquanet stash, chump. Their formula hasn’t changed a bit since Day 1: Guitarist Satchel, bassist Lexxi Foxx and drummer Stix Zadinia (say that five times fast) lay down thundering glam-slam tracks fuelled with crunchy riffs and sick solos. Michael Starr adds his ball-squeezing vocals and lyrics about sex, drugs, sex, rockin’ and sex. Serve loud and repeat as necessary.

WHAT WOULD BE A BETTER TITLE FOR THIS ALBUM? Five Five Five — The Dumber of the Beasts.

HOW SHOULD I LISTEN TO IT? While cruising the strip in your hot car with your best buds — and then hanging around outside the 7-Eleven trying to convince somebody over 18 to buy you some beer.

WHAT ARE THE BEST SONGS? All of them. And none of them. But even as you roll your eyes at the sheer idiocy on display here, it’s hard not to snigger at tunes called I’m Not Your Bitch, Fuck Everybody, Gods of Pussy and I Ain’t Buying What You’re Selling.

WHAT WILL MY FRIENDS AND FAMILY SAY? ‘Thing is, they’re really no more ridiculous than some actual heavy metal bands.’

HOW OFTEN WILL I LISTEN TO THIS? Whenever your inner 14-year-old needs to come out and play.

IF THIS ALBUM WERE ALCOHOL, WHAT KIND OF ALCOHOL WOULD IT BE? Jägermeister.

SHOULD I BUY, STREAM OR STEAL IT? Stream it — unless it starts to burn. Then head to the free clinic.