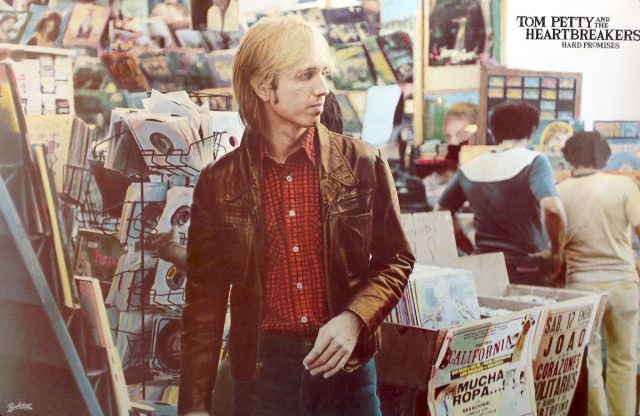 I don’t have any Tom Petty stories to share that I haven’t posted already. So, to go with my vintage promo poster for Petty’s 1981 album Hard Promises, here are five facts about the album, straight from Wikipedia:

2 | The album features guest vocals from Stevie Nicks on the duet Insider. The Heartbreakers also recorded Stop Draggin’ My Heart Around for Nicks’ album Bella Donna around the same time.

3 | The album’s release was delayed while Petty and MCA Records argued about the price. MCA wanted to charge $9.98 — so-called “superstar pricing” that was $1 more than the usual price. Petty considered naming the album $8.98 — if I remember right, there was a version of the cover where you could see that price clearly illustrated in the record bin at his elbow — and eventually MCA backed down.

4 | Hard Promises was the last album to feature bassist Ron Blair until Mojo, although he appeared on tracks on Long After Dark, Southern Accents and The Last DJ.

5 | John Lennon was scheduled to record in the same studio as Petty, but was killed before the two could meet. Petty and the band paid tribute to him by having “WE LOVE YOU J.L.” etched in the runout deadwax on early U.S. and Canadian pressings of the album.

If you’d like to own this poster, which features the full frame that was cut down for the cover art, email me. I’d love to help it find a good home.