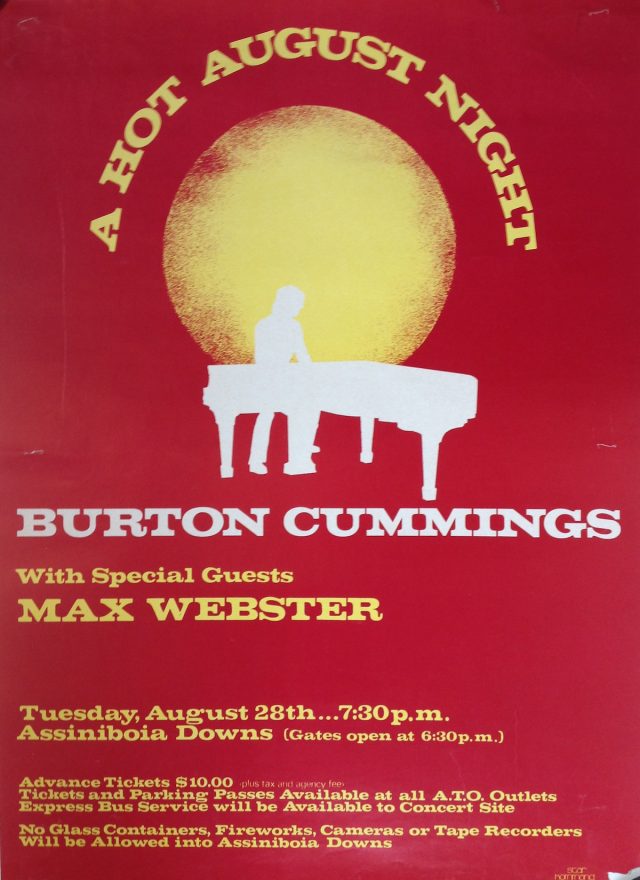 Like pretty much everybody else who grew up in Winnipeg in the ’60s and ’70s, I’ve seen my share of Burton Cummings gigs. I don’t remember if this outdoor concert 40 years ago at the Assiniboia Downs horse track was the first one. I do know it was one of the bigger ones, both in terms of the venue and the bill, which also included Eddie Money, Max Webster and Harlequin — all for the princely sum of $10. Needless to say, everybody got their money’s worth: Hometown boys Harlequin were just starting to peak with their first album. Kim Mitchell and Max were eccentric and brilliant and hilarious as always. Eddie Money also proved to be hilarious, though unintentionally — I distinctly recall him whirling his mic around by the cord like Roger Daltrey … and then hitting himself in the head with it when he failed to catch it at the last second. I can still hear the huge clonk it made bouncing off his giant noggin. I also seem to recall that Cummings delivered a solid homecoming performance, featuring most of the solo hits and Guess Who classics required by law (along with old bandmate Garry Peterson on drums, I believe). But honestly, for me it was all about Eddie smacking himself in the face. No matter how many gigs you see, that doesn’t come along every day. Good times. If you were also there (or even if you weren’t) and would like to own this poster, email me: I’d be happy to sell it to you.

UPDATE: This poster has been sold.