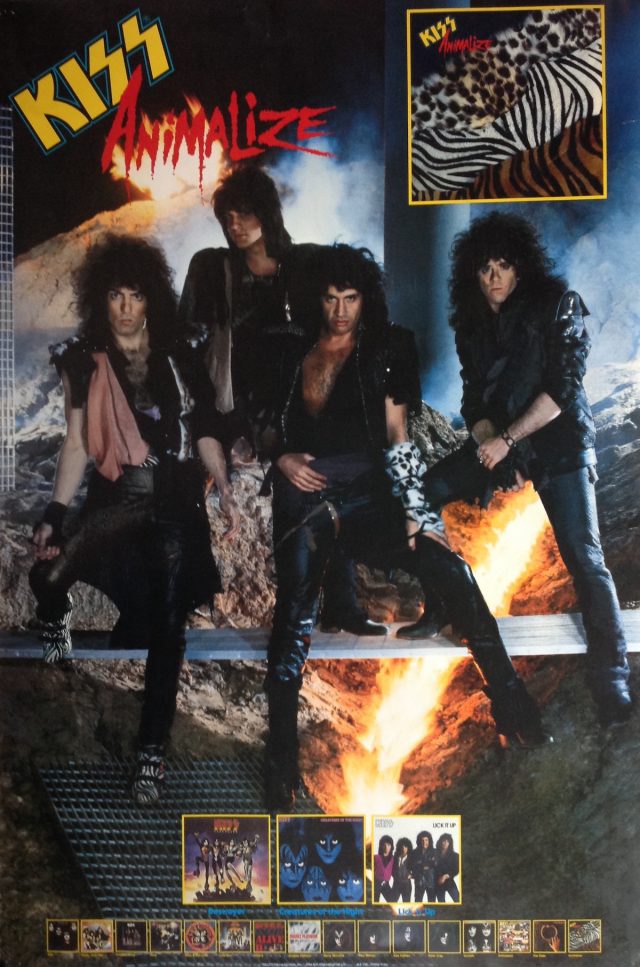 Comedy and tragedy can be two sides of the same coin. This post-apocalyptic promo poster for KISS’s 1984 album Animalize illustrates that quite succinctly, I would say. On the one hand, it’s laughable in almost every respect. The pouty expressions and poofy hair; the silly outfits (WTF is Gene Simmons wearing on his left forearm?) and sillier poses; the fire and lava and rubble — if they weren’t taking it all so seriously, this would be a spot-on parody of every shitty metal cliche from the 1980s. Even for KISS, it’s kinda dopey. And that’s saying something. Of course, as fans likely know, the backstory of this short-lived lineup is less humourous. Lead guitarist Mark St. John (in the rear, between Paul Stanley and Gene) arguably holds the ignoble distinction of being the unluckiest KISS member in history. After being plucked from cover-band obscurity to replace the ungovernable Vinnie Vincent, the former guitar teacher was in the group for less than a year, and played just a few shows. Although he did appear on most of Animalize, he reportedly had trouble creating and memorizing solos — which seem like pretty basic requirements for a lead guitarist — and then developed an arthritic condition that prevented him from performing live. Nine months after he joined, he was gone. And amazingly, his life got even worse from there — and not just because subsequent bands (including one with former KISS drummer Peter Criss) went nowhere. In 2006, after being busted for possession of drug paraphernalia, he was viciously beaten in jail, apparently for stealing another inmate’s crackers (though I would not be surprised if being a has-been “rock star” likely had something to do with it too). Following his release, he complained of chronic pain and illnesses he believed were caused by the attack. Also suffering from depression, he eventually abandoned music for manual-labour gigs, and allegedly developed a drug habit that may have contributed to his 2007 death from a brain hemorrhage linked to an accidental meth overdose. And of course, St. John isn’t the only deceased member in this picture: Drummer Eric Carr (far right) died in 1991 after battling cancer for months. I don’t know if all that makes this poster more collectible. I can tell you the curse that was apparently visited on this lineup has not manifested itself in my life so far. If you’re willing to take the risk — or if you’re just a KISS fan who would like to add this to your collection — drop me a line and we’ll work out something. But don’t say I didn’t warn you.