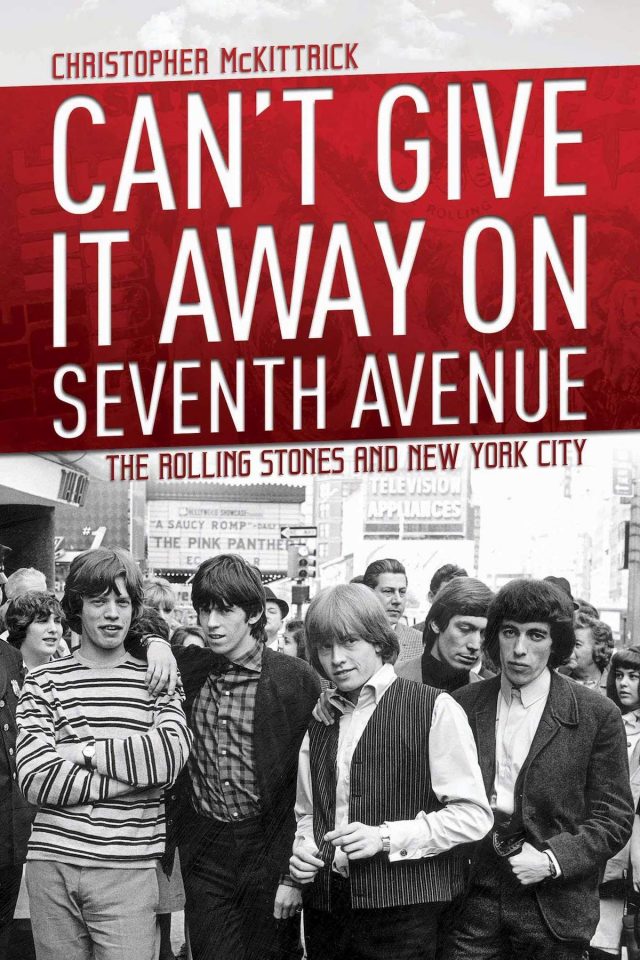 Looking for a good book about music to read over the summer? Here are the new titles due this week: 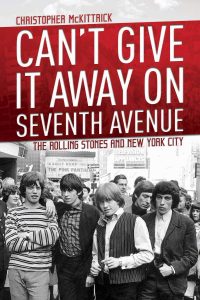 Can’t Give It Away on Seventh Avenue: The Rolling Stones and New York City
By Christopher McKittrick

THE PRESS RELEASE: “When The Rolling Stones first arrived at JFK Airport in June 1964, they hadn’t even had a hit record in America. By the end of the decade, they were mobbed by packed audiences at Madison Square Garden and were the toast of New York City’s media and celebrity scene. More than 50 years later, the history of New York City and the Stones have entwined and paralleled, with the group playing in nearly all of the Big Apple’s legendary venues. Along the way Mick Jagger, Keith Richards, and the rest of the Stones have left an impact on the culture of the city, from the turbulent “Fun City” of the 1960s and ’70s through the twenty-first century. The evolving career of the Stones has often reflected the cultural changes of the city, as the Stones and their music were the center of social and political controversies during the same era that New York faced similar challenges. Can’t Give It Away on Seventh Avenue: The Rolling Stones and New York City explores the history of the group through the prism of New York. It is a highly detailed document of the dynamic and reciprocal relationship between the world’s most famous band and America’s most famous city as well as an absorbing chronicle of the remarkable impact the city has had on the band’s music and career.” 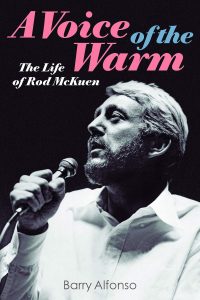 A Voice of the Warm: The Life of Rod McKuen
By Barry Alfonso

THE PRESS RELEASE: “In his 1960s-1970s heyday, Rod McKuen was a phenomenally popular singer-songwriter as well as the bestselling poet in publishing history. To his legions of fans around the world, he was a voice of compassion and healing, as much a prophet as an author/entertainer. McKuen songs like If You Go Away and Jean earned him massive hits, while books like Listen to the Warm sold millions of copies. McKuen’s huge sales and devoted following didn’t stop the critics from calling his work sentimental kitsch cranked out for the money. Who was this enigmatic artist who aroused so much love and hatred? A Voice of the Warm: The Life of Rod McKuen is the first-ever biography of one of the 20th century’s most popular and misunderstood pop-culture icons. Drawing upon extensive research and over 100 interviews, author Barry Alfonso tells how McKuen overcame childhood physical and sexual abuse to become a teenage radio host, film actor, and Beat-style poet before connecting with a vast audience as a writer and recording artist. McKuen’s role as a pioneering gay rights activist who bridged the ’60s generation gap with a message of love and tolerance help to make his story uniquely relevant today.” 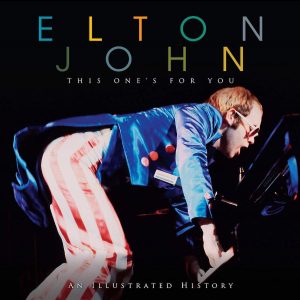 Elton John: This One’s For You
By Carolyn Thomas

THE PRESS RELEASE: “His 1970 breakthrough single Your Song began his domination of the pop charts and established his credentials to fill the post-Beatles landscape with his unique take on piano-based ballads, pop and rock. Not since 50s stars Little Richard and Jerry Lee Lewis had a man and his piano made such an impact on modern music. Few would have imagined that Elton John’s early success and real emotional connection with fans would be sustained over the next 50 years to see him become a singer-songwriter extraordinaire and one of the most successful musical theatre composers in history. Flamboyant and prone to excess, Elton has overcome problems with drink, drugs, food and his sexuality along the way to become a notable fundraiser and charity campaigner, most famously through the Elton John AIDS Foundation. Now married with two sons, Elton’s priorities have changed and he has announced his retirement from performing after 2021. So it’s the perfect time to celebrate his amazing achievements.” 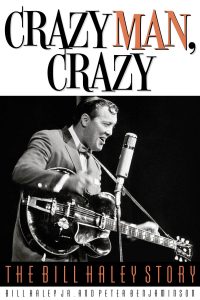 THE PRESS RELEASE: “Bill Haley – the man who brought rock ‘n’ roll into the mainstream. His song Crazy Man, Crazy was the first rock ‘n’ roll song to break the Billboard Top 20 in 1953 and was followed by his evergreen We’re Gonna Rock Around the Clock, the first song of its kind to hit #1. His success made him an idol not only in the US but throughout the world, from Canada to the UK, Europe, Australia, Japan, New Zealand, and beyond. Yet Haley is often overlooked in the story of rock ‘n’ roll, overshadowed by others who followed him, from sex symbol Elvis Presley to wild man Jerry Lee Lewis and forever-young Buddy Holly. But Haley’s lack of visibility was in part his own doing: he had conflicted feelings about fame, was extremely private, suffered chronic alcoholism, and troubled relationships with multiple wives, which yielded ten children who he struggled to support. Though he managed to carry on a successful touring career, his demons eventually eroded his health, and in 1981, at the age of only 55, he passed away. This book is written by esteemed biographer Peter Benjaminson and Bill Haley Jr., Haley’s son, a musician himself, who tours the world paying tribute to his father’s music. Culled from interviews with insiders – from ex-wives to the Comets, recorded conversations with Haley Sr., official documents, diaries, and more, this book not only charts the happenings of Haley’s career but gives insight into the Haley behind the curtain and some of the other trials he faced, from the dark side of the music business to ties with Mafia. Featuring a collection of rare photographs, this book is a must-have for any serious rock ‘n’ roll fan.” 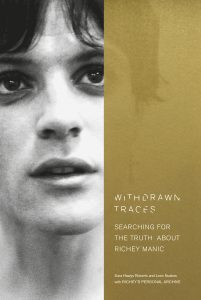 Withdrawn Traces: Searching for the Truth about Richey Manic
By Hawys Roberts, Sara and Leon Noakes

THE PRESS RELEASE: “On 1 February 1995, Richey Edwards, guitarist of the Manic Street Preachers, went missing at the age of 27. On the eve of a promotional trip to America, he vanished from his London hotel room, his car later discovered near the Severn Bridge, a notorious suicide spot. Over two decades later, Richey’s disappearance remains one of the most moving, mysterious and unresolved episodes in recent pop culture history. For those with a basic grasp of the facts, Richey’s suicide seems obvious and undeniable. However, a closer investigation of his actions in the weeks and months before his disappearance just don’t add up, and until now few have dared to ask the important questions. Withdrawn Traces is the first book written with the co-operation of the Edwards family, testimony from Richey’s closest friends and unprecedented and exclusive access to Richey’s personal archive. In a compelling real-time narrative, the authors examine fresh evidence, uncover overlooked details, profile Richey’s state of mind, and brings us closer than ever before to the truth.” 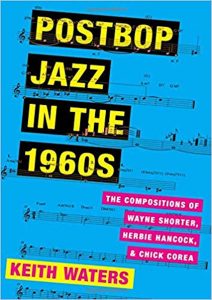 Postbop Jazz in the 1960s: The Compositions of Wayne Shorter, Herbie Hancock, and Chick Corea
By Keith Waters

THE PRESS RELEASE: “Innovations in postbop jazz compositions of the 1960s occurred in several dimensions, including harmony, form, and melody. Postbop jazz composers such as Wayne Shorter, Herbie Hancock, and Chick Corea broke with earlier tonal jazz traditions. Their compositions marked a departure from the techniques of jazz standards and original compositions that defined small-group repertory through the 1950s: single-key orientation, schematic 32-bar frameworks (in AABA or ABAC forms), and tonal harmonic progressions. The book develops analytical pathways through a number of compositions, including El Gaucho, Penelope, Pinocchio, Face of the Deep (Shorter); King Cobra, Dolphin Dance, Jessica (Hancock); Windows, Inner Space, Song of the Wind (Corea); as well as We Speak (Little); Punjab (Henderson); Beyond All Limits (Shaw). These case studies offer ways to understand their harmonic syntax, melodic and formal designs, and general principles of harmonic substitution. By locating points of contact among these postbop techniques-and by describing their evolution from previous tonal jazz practices-the book illustrates the syntactic changes that emerged during the 1960s.” 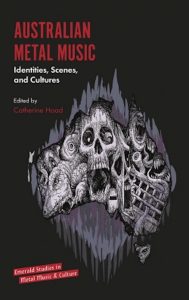 THE PRESS RELEASE: “Defining Australian metal is a challenge for scene members and researchers alike. Australian metal has long been situated in a complex relationship between local and global trends, where the geographic distance between Australia and metal music’s seemingly traditional centres in the United States and United Kingdom have meant that metal in Australia has been isolated from international scenes. While numerous metal scenes exist throughout the country, ‘Australian metal’ itself, as a style, as a sound, and as a signifier, is a term which cannot be easily defined. This book considers the multiple ways in which ‘Australianness’ has been experienced, imagined, and contested throughout historical periods, within particular subgenres, and across localised metal scenes. In doing so, the collection not only explores what can be meant by Australian metal, but what can be meant by ‘Australian’ more generally. With chapters from researchers and practitioners across Australia, each chapter maps the distinct ways in which ‘Australianness’ has been grappled with in the identities, scenes, and cultures of heavy metal in the country. Authors address the question of whether there is anything particularly ‘Australian’ about Australian metal music, finding that often the ‘Australianness’ of Australian metal is articulated through wider, mythologised archetypes of national identity. However, this collection also reveals how Australianness can manifest in metal in ways that can challenge stereotypical imaginings of national identity, and assert new modes of being metal ‘downungerground’.”