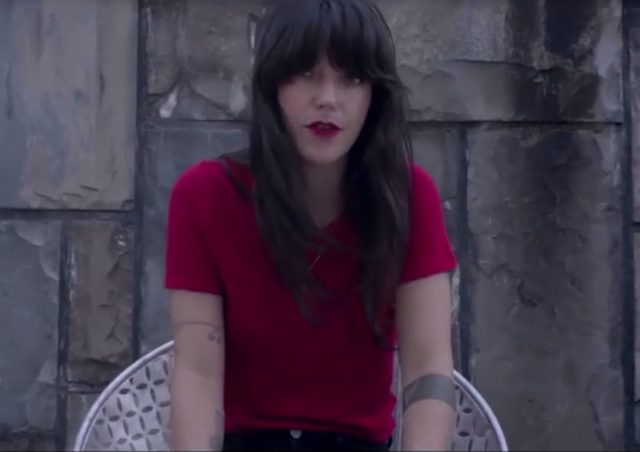 1 Sharon Van Etten’s latest album Remind Me Tomorrow has already been lauded as one of the best albums of 2019’s first half. If you need another reminder, here it is: The clip for her buzzy low-rocker No One’s Easy to Love, which finds her strolling through the concrete canyons of an imposingly bleak office-tower landscape. Just call her a towering presence. SAYS THE PRESS RELEASE: “Happy to share another video I made with my dear friend Katherine Dieckmann. Stark, simple, raw,” says Van Etten. “She allowed me to be myself as she took the reins with capturing my performance in her favorite part of downtown Albany.” Take a stroll:

2 Change comes to us all, one way or another. Today it comes in the form of the symbolic and cinematic video for Halifax singer-songwriter Rich Aucoin’s latest track The Change, a soaring pop-rock anthem with the occasional melodic echo of David Bowie’s Heroes. It’s the kind of change that’s easy to embrace. SAYS THE PRESS RELEASE: “The Change is in you. If you let go. To it all…” says director Hanlon McGregor. “Michael Finn aka Hanlon aka Papa looks back at his younger self through the mirror. Sees the moments when he knew something wasn’t quite right. The moments before he had language or understanding for that difference he saw in the mirror. Glimpses of the time before he was free to dance and to swim without limits or fear …the dream of so many trans people. His daughter Irene plays his younger self struggling to be seen. A Phoenix appears to help clear the way, to remind him that on the other side of the flame, on the outside of the cocoon, the pain ends and the wings emerge.” Phew aka wow aka OK:

3 Love Pulp Fiction? Especially the classic dance scene between John Travolta and Uma Thurman? Wish you could recreate it — but you’re cursed with two left feet? Congratulations! You’ve got something in common with singer-songwriter Kyle Craft. Take a gander at the slo-mo video for his new glitter-ball ballad Deathwish Blue — from his band Showboat Honey’s eponymous July 12 album — and you’ll see what I mean. Or just read on. SAYS THE PRESS RELEASE: “I can’t dance and my fiancée Lydia isn’t the biggest fan of it either…we’d actually never danced together before the shoot. We wanted to have fun and aim for a Pulp Fiction vibe. So, I just slicked back the mop, cranked Spirit in the Sky over the bar speakers, and we went for it.” That’s where I wanna go when I die:

4 Have you ever watched a video and thought: Gee, that was swell. But I wish there were four more parts to it? Toronto collective New West feel your pain. And they’re here to help. Their latest clip for the romantic piano ballad Those Eyes is the first chapter in a five-part short film directed by Sean Brown to complement their recently released debut EP Call Me When You Hear This. Pop the corn and enjoy. SAYS THE PRESS RELEASE: “Discussing the concept for the five chapter film, director Sean Brown stated, “A lot of people can relate to falling in and out of love. This film is about the cycle of love, from its beginnings to its endings, and those involved, losing and finding themselves in between. I’m such a fan of this band and it was an honour to help tell this story.” Our story begins:

5 Joy and misery go hand in hand for Crown the Empire fans today. The joy: The Dallas metalcore brigade just announced they’ll release their new album Sudden Sky on July 19. The misery: The animated video for their new single MZRY. SAYS THE PRESS RELEASE: “Our new album Sudden Sky is a digital representation of who we are at this moment in time,” Crown the Empire stated. “It captures our innermost fears and anxieties while questioning humanity and the chaos of the world we live in today. This urgent search for meaning taught us that the only way to truly be human is to be vulnerable. Sudden chance and destruction will lead to your liberation…” MZRY loves company:

6 Everyone knows close counts in horseshoes and hand grenades. Now you can add a third pursuit to that list: Canadian dance-pop videos. The evidence: Close, the smouldering new single from singer Mauve — showcased here with a lyric video. SAYS THE PRESS RELEASE: “I compare the energy of love to a growing fire,” she says of the chill-bop pop track sprinkled with hints of tropical house and RnB. “The energy a person emits attracts you… Then it spreads like a wildfire… I imagine a scene of watching embers in a fire start to glow, and that’s like the magic that’s birthed through that special connection with someone. That’s why I said a feeling like that cannot feel close enough because you want it completely come over you.” Feel the spark:

7+8 Even cult heroes have anniversaries to celebrate. And a month from now, New York folk-punk iconoclast Ed Hamell — perhaps slightly better known as Hamell on Trial — will mark the 20th anniversary of his Choochtown album with a remastered reissue bolstered with 11 previously unreleased bonus tracks. If it’s been a while since you visited Choochtown, here’s a sneak peek at what you’re in for: A double-shot of his classic strummer Bobby Comes Down, along with a scrappier alternate version produced by Billy Nicgorski. SAYS THE PRESS RELEASE: “20 Years! Wonderful to know that Choochtown still holds up, continues to roam the streets at midnight, spray painting slogans of rebellion on corporate store fronts … For those of you that champion the disenfranchised, the square pegs in the round holes, those gazing from the shores of sanity and witnessing the tides of hatred and facism slithering closer to the sands, Bobby, Chooch, Nancy and all the gang down in Choochtown that refuse to be blown to the dusts of oblivion want to buy you a drink. They welcome you…and on shocking pink vinyl no less!” Hit the town:

9 Rae Spoon has a lot on their mind these days, it seems. The non-binary singer-songwriter’s upcoming tenth album is titled Mental Health – and fittingly traces their personal journey through eight indie-pop songs about trauma, loss and suicide. Let’s start with something a little less painful: Insomnia, the subject of the darkly stomping first single I Can’t Sleep, featuring guest vocals from Pack A.D.’s Becky Black. SAYS THE PRESS RELEASE: “I like to write songs about things that happen to me, but I haven’t heard a lot of songs directly about it. Like so many people, I struggle with insomnia and there’s something other-wordly about being awake when everyone else is asleep. I try to take the listener to that world with the music.” Up and at ’em:

10 You might remember Hannah Stewart from her tantalizing single Afterglow, which I blurbed about back in late March. No? No worries; the California electro-popster’s latest number Hotter Exposed will make just as fine an introduction, thanks to its shapeshifting fusion of ’80s synths, dreamy vocals, white-noise spikes and other elements that live up to her credo: “I don’t make music I can’t dance to.” The same goes for you. SAYS THE PRESS RELEASE: Nothing. Stewart’s track will tell you everything you need to know. You’re getting warmer: