When I’m not listening to music — and sometimes when I am — there’s a good chance I’m reading about music. You too? You’ve come to the right place. Here are the biographies, memoirs, coffeetable tomes and other music-related books due this week:

THE PRESS RELEASE: “The Brian Jonestown Massacre are probably best known for their leader Anton Newcombe’s incendiary persona, as captured in the controversial 2004 rockumentary Dig! – which won the Grand Jury Prize at Sundance – but what isn’t known is the truth behind the making of the film, or the true story of the band since their formation in early 1990s San Francisco. Until now. Writer, actor, and musician Jesse Valencia spent ten years uncovering the mysteries of the band and the film, during which time he has traveled from San Francisco to Denver, Portland to Tucson, and beyond, gathering pieces of the band’s history and putting them together, clue by clue, until he found it. Presented as a personal narrative and compiled from hundreds of sources and interviews with key members of The Brian Jonestown Massacre – including Joel Gion, Rick Maymi, Frankie Emerson, Jeff Davies, Dean Taylor, Miranda Lee Richards, and Peter Hayes – as well as members of The Dandy Warhols, Dig! director Ondi Timoner, and countless other figures from both the film and from the band’s greater history, Keep Music Evil is the definitive work on the band and their enigmatic leader.” 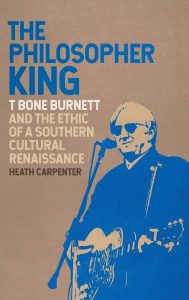 The Philosopher King: T Bone Burnett and the Ethic of a Southern Cultural Renaissance
By Heath Carpenter

THE PRESS RELEASE: “Texas-born T Bone Burnett is an award-winning musician, songwriter, and producer with over forty years of experience in the entertainment industry. In The Philosopher King, Heath Carpenter evaluates and positions Burnett as a major cultural catalyst by grounding his work, and that of others abiding by a similar roots ethic, in the American South. Carpenter examines select artistic productions created by Burnett to understand what they communicate about the South and southern identity. He also extends his analysis to artists, producers, and cultural tastemakers who operate by an ethic and aesthetic similar to Burnett’s, examining the interests behind the preservationist/heritage movement in contemporary roots music and how this community contributes to ongoing conversations regarding modern southern identity. The Philosopher King explores these artistic connections, the culture in which they reside, and most specifically the role T Bone Burnett plays in a contemporary cultural movement that seeks to represent a traditional American music ethos in distinctly Southern terms. Carpenter looks at films, songs, soundtracks, studio albums, fashion, and performances, each loaded with symbols, archetypes, and themes that illuminate the intersection between past and present issues of identity. By weaving together ethnographic interviews with cultural analysis, Carpenter investigates how relevant social issues are being negotiated, how complicated discussions of history, tradition, and heritage feed the ethic, and how the American South as a perceived distinct region factors into the equation.” 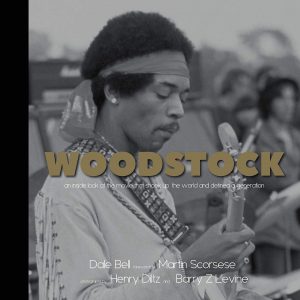 Woodstock: A Photographic Look at the Movie that Shook Up the World and Defined a Generation
By Dale Bell

THE PRESS RELEASE: “Where were you in the summer of ’69? During these tumultuous times, the war was raging; Ali had been stripped of his crown; and in an obscure patch of earth in upstate New York, an event called Woodstock would change the world. This unique book is a collection of remembrances and perceptions from the filmmakers who created, and for performers and festival producers who appeared in, the Academy Award winning film, Woodstock. Featuring Janis Joplin, David Crosby, The Who, Joan Baez, Merv Griffin, and many, many, more.”