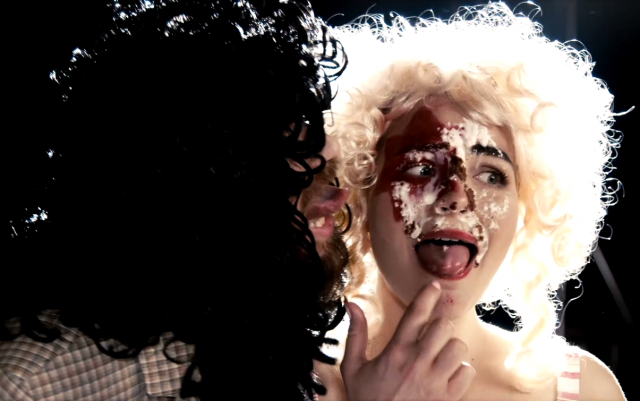 The theatrical German electro-pop duo’s latest playfully provocative single is about the way certain sounds — like your loved one’s breathing, chewing or snoring — can drive you nuts. Not surprisingly, it’s based on a true story. And the names have not been changed to protect the innocent.

“It happened during a break at a rehearsal,” the pair explain in an email. ” ‘Can you chew a little quieter please?’ ‘Excuse me?! You saying I’m chewing loud?’ ‘No but…’ A week and a near-breakup later and our song Misophonic was born. Imagine you date somebody you’re very into, but you can’t stand the small sounds he or she is making.The tragic and comedic element of this made for a perfect music video idea which we shot on one day in the famous venue WABE in Berlin.”

La Roboká is the pairing of Lady K and Robulus. She is a classic soprano singer with an ongoing history on opera stages. He not only composes film music but also works as a director. They had known each other for a long time before they finally realized their joined musical potential during a film production they both worked on.

With La Roboká, they share their common interest in exciting, danceable, captivating music and putting on an extra layer of theatrics. They jump between genres, give you an emotional anthem to sing along and then surprise you with an ecstatic electro-pop tune. They like doing this. They are happy when you like it too

After dropping the first single Bipolar, they released their debut EP Maskalicious on Spotify, iTunes and many other streaming platforms. Misophonic is their first music video.