I couldn’t read music if you put a gun to my head. But I have no trouble reading about music. Here are the biographies, memoirs and other music-related books due this week: 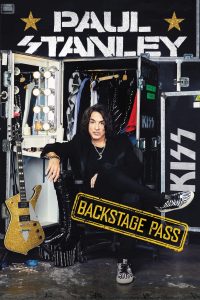 SAYS THE PRESS RELEASE: “The New York Times bestselling author and front man and rhythm guitarist of KISS grants fans an all-access backstage pass to his personal life and shows them how to pursue a rock ‘n’ roll lifestyle of their own, offering hard-won advice from a music legend. In this follow-up to his popular bestseller Face the Music, the Starchild takes us behind the scenes, revealing what he’s learned from a lifetime as the driving force of KISS, and how he brings his unique sensibility not only to his music career but to every area of his life—from business to parenting to health and happiness. Backstage Pass takes you beyond the makeup as Paul shares fascinating details about his life—his fitness routine, philosophy, business principles, how he maintains his inspiration, passion, and joy after nearly 50 years of mega success including selling out tours, 100 million albums sold and an art career that has amassed over 10 million dollars in sales. Divulging more true stories of the Rock & Roll Hall of Famer’s relationships, hardships, and pivotal moments, it also contains intimate four-color, never-before-seen photos from Paul’s personal collection, and offers surprising lessons on the discipline and hard work that have made him one of the healthiest and most successful rock ‘n’ roll icons in history. This is the book for fans who love living large, but also want to take control and move ahead in everyday life. Paul shows you how you can rock ‘n’ roll all night and party every day—without missing a beat.” 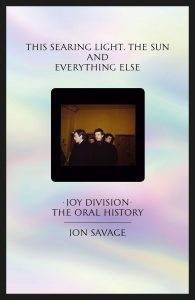 This searing light, the sun and everything else: Joy Division: The Oral History
By Jon Savage

SAYS THE PRESS RELEASE: “An exciting new book on Joy Division, featuring never before told stories. Jon Savage’s oral history of Joy Division is the last word on the band that ended with the suicide of Ian Curtis in Macclesfield on 18 May, 1980. It weaves together interviews conducted by the author, but never used in the making of the film Joy Division (2007) which told the story of the band in their own words, as well as those of their peers, collaborators, and contemporaries. Here are 15 or so vivid witnesses to the band’s genesis, meteoric rise, and tragic demise, including Peter Hook, Bernard Sumner, Annike Honore, Deborah Curtis, Paul Morley, Tony Wilson, Rob Gretton, Martin Hannet … It is the story of young men driven to create and cause rock n’ roll havoc inspired by literature, radical ideas, and the wasteland that was post-industrial Manchester in the late 70s. It is as intense and funny and alive on the page as only an oral history can be, recalling masterpieces like Edie by Jean Stein and Meet me in the Bathroom by Lizzy Goodman. It is essential reading.” 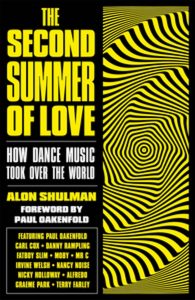 The Second Summer of Love: How Dance Music Took Over The World
By Alon Shulman

SAYS THE PRESS RELEASE: “In 1987, four friends from London, Paul Oakenfold, Danny Rampling, Nicky Holloway and Johnny Walker, took a week-long holiday to Ibiza. What they saw there, and brought back home, would give rise to a new global music and counterculture movement. As the eighties drew to their close, with Thatcherism holding the nation tight in its grip, something funny was happening right across the jungle of Britain’s nightlife scene. People were dressing down, not up, to go to clubs. And they were dancing right through the night armed seemingly with only bottles of water. Ecstasy and acid house music had arrived on British shores, and a tribal battle between for the moral future of the nation, between the youth and the establishment, had begun. In The Second Summer of Love, author and dance music promoter Alon Shulman uses exclusive contributions from the world’s biggest DJs, including Paul Oakenfold, Carl Cox, Fatboy Slim, Moby, The Prodigy, Boy George and many others to faithfully recreate the story of the summers of 1988 and 1989, and chart the birth and rise of Acid House, dance music and club culture right through to the modern day. Complete with stunning unseen photographs, this is the first authentic account of what really happened in that glorious period – from the politics and the people to the music, the drugs, the fashion and the culture – told by people who were there, as they bring to life the creation of an underground scene which inadvertently altered the course of modern global youth culture forever.” 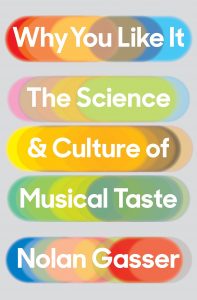 Why You Like It: The Science and Culture of Musical Taste
By Nolan Gasser

SAYS THE PRESS RELEASE: “From the chief architect of the Pandora Radio’s Music Genome Project comes a definitive and groundbreaking examination of how your mind, body, and upbringing influence the music you love. Everyone loves music. But what is it that makes music so universally beloved and have such a powerful effect on us? In this sweeping and authoritative book, Dr. Nolan Gasser―a composer, pianist, and musicologist, and the chief architect of the Music Genome Project, which powers Pandora Radio―breaks down what musical taste is, where it comes from, and what our favorite songs say about us. Dr. Gasser delves into the science, psychology, and sociology that explains why humans love music so much; how our brains process music; and why you may love Queen but your best friend loves Kiss. He sheds light on why babies can clap along to rhythmic patterns and reveals the reason behind why different cultures around the globe identify the same kinds of music as happy, sad, or scary. Using easy-to-follow notated musical scores, Dr. Gasser teaches music fans how to become engaged listeners and provides them with the tools to enhance their musical preferences. He takes readers under the hood of their favorite genres―pop, rock, jazz, hip hop, electronica, world music, and classical―and covers songs from Taylor Swift to Led Zeppelin to Kendrick Lamar to Bill Evans to Beethoven, and through their work, Dr. Gasser introduces the musical concepts behind why you hum along, tap your foot, and feel deeply. Why You Like It will teach you how to follow the musical discourse happening within a song and thereby empower your musical taste, so you will never hear music the same way again.” 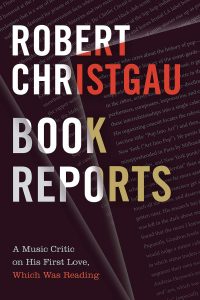 Book Reports: A Music Critic on His First Love, Which Was Reading
By Robert Christgau

SAYS THE PRESS RELEASE: “In this generous collection of book reviews and literary essays, legendary Village Voice rock critic Robert Christgau showcases the passion that made him a critic—his love for the written word. Many selections address music, from blackface minstrelsy to punk and hip-hop, artists from Lead Belly to Patti Smith, and fellow critics from Ellen Willis and Lester Bangs to Nelson George and Jessica Hopper. But Book Reports also teases out the popular in the Bible and 1984 as well as pornography and science fiction, and analyzes at length the cultural theory of Raymond Williams, the detective novels of Walter Mosley, the history of bohemia, and the 2008 financial crisis. It establishes Christgau as not just the Dean of American Rock Critics, but one of America’s most insightful cultural critics as well.”