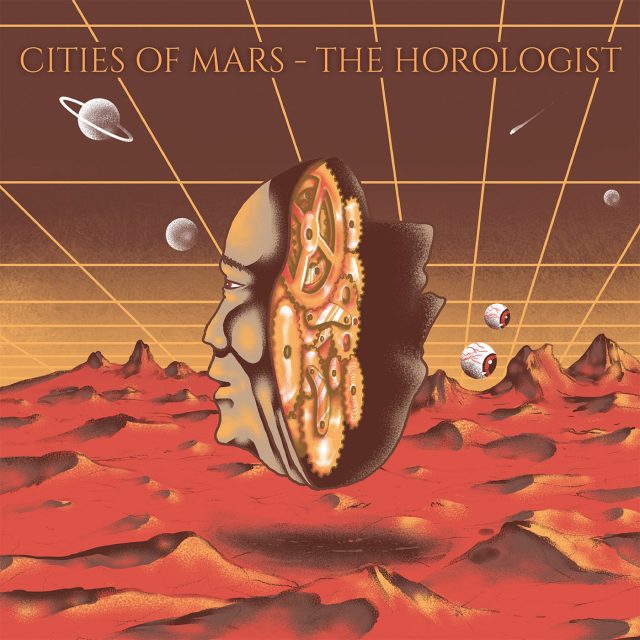 Stop me if you’ve heard this one before: In the year 3151 on the planet Mars, somewhere in the capital city of Bah-Belon — a sprawling metropolis built within a colossal mountain that is crested with an ever-watching eye and surrounded by mining caves and mushroom fields — a mad scientist called The Horologist kidnaps people and implants a diabolical biochemical agent called the Necronograph onto their hearts in order to steal the energy of their heartbeats and transfer it to the Horologist to extend his life. Yep, that old cliche. Like it or not, it’s apparently the story behind The Horologist, the sophomore album from Swedish doom-sludge prog masters Cities of Mars. It may also somehow be a continuation of their first album Temporal Rifts, about a Soviet cosmonaut who discovered an ancient civilization on the Red Planet during a covert space mission in the ’70s, but that’s unclear. What is unmistakable is that this power trio unleashes these tracks with an insurmountable amount of destructively plodding bombast, intricately soaring riffage and ominously brooding intensity — all the better for their singer to scream about electric dreams, hydraheads and floating museums at the top of his lungs like Ozzy Osbourne being electrocuted via jumper cables attached to his gonads. And I know you haven’t heard that before.