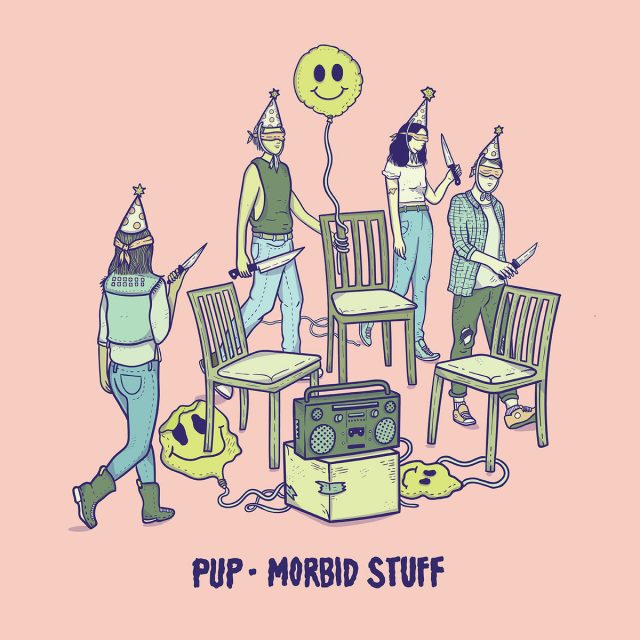 Everybody gets older — but nobody grows up. Not really. Just ask any senior citizen how old they feel inside; I guarantee they’ll give you a number between 15 and 20. And here’s something else to look forward to: Life doesn’t get any easier as the years go by. All the shit stays the same. You just get better at dealing with it — if you’re lucky. Right now, PUP singer-guitarist Stefan Babcock doesn’t sound like he’s having much luck. Granted, he’s still a fairly young, um, pup. Even so, you don’t have to look past the title of the Toronto punks’ third full-length Morbid Stuff to grok that Babcock has more issues than a magazine warehouse. There’s death and dying, of course. But also depression, drinking, drugs, desperation and destitution. And let’s not forget self-harm, sibling rivalry, breakups and breakdowns. All of those awful topics (and a few more) take turns on his musical and mental couch over the course of this 11-song therapy session. Granted, he usually delivers them with a razor-sharp melody, an anthemic chorus and a disarming double-strength dose of pitch-black, self-deprecating humour (“It’s been a couple of days / Since I’ve had a full blown meltdown / But I’m still a loser and always will be / So why change now?”). And his bandmates never fail to hold up their end of the bargain, supporting him with pop-punk, indie-rock and hardcore tracks that are rendered with the rambunctious energy and unflagging enthusiasm of kids half their age (but the confidence and skill that comes with experience). So you end up with an album that manages to be depressing, hilarious and rousingly cathartic all at the same time. And as long as these guys can pull that off, who needs to grow up?