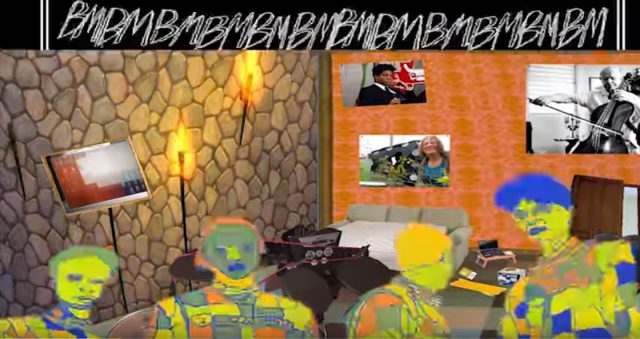 Black Midi are all abuzz, Rose Hotel checks in, Chai look drawn, Lissie spreads rumors and more in today’s Roundup. What kind of a jerk walks through his neighbour’s yard — and then leaves both gates wide open? I mean, come on!

1 The buzz surrounding Black Midi these days is so loud it’s almost surprising they can actually hear themselves play. The eccentric and enigmatic London outfit were one of the undisputed standouts at this year’s South by Southwest festival. And if the year-old ensemble’s brand-spanking single Crow’s Perch is anything to go by, they are indeed slightly more interesting than the average band. Assuming you’re interested by complex polyrhythms, prime-number time signatures, angular melodies, weird vocals and near-robotic Devo-like performances. Are they not men? SAYS THE PRESS RELEASE: “The accompanying video, directed and edited by Vilhjálmur Yngvi Hjálmarsson, also known as susan_creamcheese, reflects the track’s frenetic energy, juxtaposing saturated graphics and peculiar scenes with mundane images.” Catch the buzz:

2 Rose Hotel is one of those people who seem to inspire more questions than they answer. For instance: Why does she call herself Rose Hotel when she’s really Atlanta singer-songwriter Jordan Reynolds? What is the meaning behind the enigmatic and intriguing title of her May 31 debut album I Will Only Come When It’s A Yes? And on her preview single 10 K — a bouncy, jangly gust of lo-fi pop whose vocals are so dreamy they’re almost totally indecipherable — is she singing about a marathon or a distance or money or gold or what? See if you can figure it out from the accompanying home-movie video. Then tell me, please. SAYS THE PRESS RELEASE: “On 10 K Reynolds sings, “Nearly old enough but too young to understand / Time isn’t slowing down and I see wrinkles in my hands.” The deceptively dark lyrics juxtaposing the song’s bright soundscape.” Yeah, still not helping.

3 Japanese pop-punk princesses Chai are already more or less a living cartoon. So it was probably only a matter of time until they went all the way and became a fully animated ensemble — on the video for the pop-rock anthem Curly Adventure, naturally. And just as naturally, their colourful exploits involve a car that can go underwater and into space, a teddy bear in a treasure chest and … um, dumplings. Sure, why not? SAYS THE PRESS RELEASE: “In a swirl of vibrant colors and eccentric scenes, CHAI themselves star as animated characters, designed by the band’s primary artistic director and bassist, YUUKI, and realized and animated by LA-based artist/animator Sean Solomon.” Happy go-go fun time:

4 Who doesn’t love a Fleetwood Mac cover? Nobody, that’s who. That includes singer-pianist Lissie, who just released this uncanny solo rendition of the Rumors classic Dreams, a sequel to her version of Go Your Own Way and a preview of her forthcoming disc When I’m Alone: The Piano Retrospective. SAYS THE PRESS RELEASE: “Stripping away much of the original’s lush instrumentation, Lissie’s cover of Dreams (Piano Version) leaves plenty of open space. The piano serves as a supportive backbone allowing the emotionally-naked vocals to take center stage. While Stevie Nicks’ voice took a commanding presence, Lissie cops a more contemplative and vulnerable pose, striking deep in your core.” When the rain washes you clean, you’ll know. You will know:

5 Break out the pentagrams, light the black candles, cue the vixens and ready the ritual sacrifice: Austin stoner-metal heavyweights Duel are back with their latest slab of heaviosity: The single Black Magic Summer from their upcoming fourth full-length Valley of Shadows. And thanks to the wonders of stock horror-movie footage, they’ve got a cheeseball video to match. Musically, of course, you should know they’re still out standing in their field. Literally. SAYS THE PRESS RELEASE: “More blood-splattered tales of black magic, sex, ancient curses and devils on the streets? Well, it seems so: with eight epic and infectious rippers, DUEL showcase a wider songwriting going from psychedelic heavy metal anthems to Thin Lizzy-esque dueling guitars, to full-blast shredding.” Let the invocation begin, puny human:

6 Holograms are all the rage in music these days. So I guess we shouldn’t be surprised that the stupendously named Seattle pop-rockers Tacocat are jumping on the bandwagon — at least sarcastically — with the vibrant number Hologram, the second single from their upcoming fourth album This Mess Is a Place, due May 3. Of course, it should also come as no surprise that their song isn’t even really about holograms. I mean, who do you think they are, Roy Orbison? SAYS THE PRESS RELEASE: “Just remember if you can, power is a hologram,” lead singer Emily Nokes intones on the track, which smuggles a discourse on power dynamics and the nature of reality inside of a candy-colored pop-rock coating.” Hey, it’s Taco Tuesday:

7 You can’t make old friends. But can you make old graffiti. Apparently you can. Though it helps if you’re Bibio, the alter ego of singer-songwriter and multi-instrumentalist Stephen Wilkinson. And if your Old Graffiti is not weathered spraypaint but is in fact breezy Latin-pop from your upcoming album Ribbons. And it’s even better if it’s set to a sandy groove, dusted with layers of interwoven guitar and keyboard, and dusted with your richly reverberating, near-falsetto croon. It’s really just that easy! SAYS THE PRESS RELEASE: “Wilkinson’s writing process typically starts with a guitar; “There’s at least one in nearly every room of my house,” he discloses. However, on Old Graffiti he opted for percussion as the starting point, later adding bass guitar, clavinet and vocals to the shuffling rhythm to build a slice of warm, hazy pop.” In with the old:

8 It’s almost time to say hello to singer-songwriter Chris Cohen’s new self-titled album, which arrives Friday. But there’s just enough time for Cohen to offer up one last preview of the disc: The glistening guitar-pop single No Time To Say Goodbye. But it’s audio-only; guess he had no time to crank out a video. SAYS THE PRESS RELEASE: “No Time To Say Goodbye features Kasey Knudsen on saxophone with lyrics by Zach Phillips and arrangements by Jay Israelson. Chris Cohen marks the first time Cohen has actively collaborated in the studio with others on his own music, rather than recording everything alone.” There’s always time for a sax solo:

9 Bright Curse have all the time in the world. Or at least they act like it. The London psyche-rockers’ slow-rolling single Shadows — a preview of their May 10 release Time of the Healer — clocks in at nearly 11 doom-laden minutes. But somehow, singer-guitarist Romain Daut and co. manage to keep you hanging in for the duration with their trippy cocktail of crunching riffs, searing solos and ominous vocals. Sometimes, more is more. SAYS THE PRESS RELEASE: “Of the upcoming album, Daut adds, “It’s a come-back to a doomier version of Bright Curse, more like the first EP. The songs are a bit longer and more developed, each relates a story, and all of them work together to create some kind of tale. I didn’t want to just have another heavy album, so we added some exotic instruments and I think it serves the story really well.” Are you sitting comfortably?

10 Fasten your seatbelts, kids! Belfast synthwave master (and Friend of Tinnist) Alpha Chrome Yayo is back in the driver’s seat with his new single Cerberus 3000 (Killing Time), the second instalment in a three-headed beast (naturally) of songs based around the need for speed and the thrill of putting the hammer down. And I haven’t even mentioned that the B-side is called A Sweet Care Named Demented. Because of course. SAYS THE PRESS RELEASE: “It’s an intense, axe-laden instrumental with a huge, irresistible beat, wild FM synths and glossy production bringing ‘80s nostalgia screaming into 2019. It’s an engaging, inventive retro-tinged track that looks forward as much as it looks back, and it’s tons of fun.” Gentlemen, start your engines:

Albums Of The Week: Chai | Wink