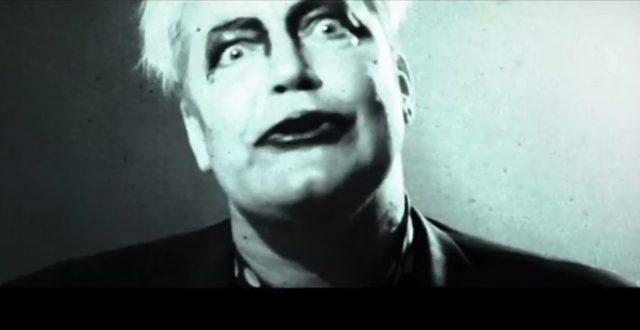 TSOL get you straight trippin’, The Entrepreneurs are in session, In the Valley Below rise and more in today’s Roundup. My cat has started this new thing where she’ll only get on my lap by getting up onto the back of the couch and walking down my chest. What’s up with that?

1 If you made a list of songs SoCal punk vets TSOL might cover, R&B diva Amerie’s 2005 chestnut 1 Thing would probably not be on it. So naturally, it’s their new single — delivered with the funky hip-shaking backbeat intact. But trust these rabble-rousers to find a political statement at the heart of that groove — and illustrate it with a fittingly trippy video. SAYS THE PRESS RELEASE: “Frontman Jack Grisham says, “I like go-go music and soul and anything that really moves. I first heard Amerie’s 1 Thing in 2005, when it was released. Fucking infectious man, the way that groove keeps rolling, and she’s such a great vocalist. The lyrics were your basic relationship trip but then it hit me, this isn’t just a song about some dude, these lyrics read like a song to a system or a government that’d been up to no good. When she sang, “memories keep ringing bells” I was thinking of the state of our union today, the turmoil in our society, and where we’d been before—I was musing on our involvement in the Middle East, Latin America, Vietnam. I was thinking about the dirty deeds that this nation had been up to and then she sang, “why don’t you just admit it” and I realized that no one in power, not in this country, was ever gonna admit that we were wrong.” Get up to get down:

2 How often do you get to watch a band perform in a silo? Not often enough, I’ll bet. Well, consider your wishes granted today — by Copenhagen noise-rockers The Entrepreneurs, who quite fittingly made the most of their limited surroundings by filming a video for the smouldering post-grunge anthem Session 1, from their recent album Noise and Romance. SAYS THE PRESS RELEASE: “Session 1 is a grunge- and post rock-inspired track that enters with a big and wide guitar riff, explosive drums and Mathias Bertelsens’ signature vocals that brings it all together.” Now in session:

3 Cinematic is an adjective applied to countless videos — sometimes accurately, sometimes not. But in the case of In the Valley Below’s new clip for the single Rise, it’s literally true. And in more ways than one. The European arthouse-style video isn’t just a promo device for the Michigan-via-L.A. duo’s gliding new dream-pop offering; it’s also the trailer for a full-length feature film made to complement the band’s forthcoming sophomore album The Pink Chateau. Because I guess recording music wasn’t difficult enough already? SAYS THE PRESS RELEASE: “The Pink Chateau film is the story of a young woman who follows a beautiful stranger into the countryside. What unfolds is a series of sensual and intimate tales in the form of a silent film set to In The Valley Below’s new album. A dreamlike diorama of interconnected musical vignettes inspired by vintage French erotica and the faded colors of 1970s films, each song on the record serves as a portal through which the film’s enigmatic female protagonist confronts her most deep-seated desires.” Fire up the popcorn:

4 Most people would presume a song and video called Moonshine would be about drinking illegal alcohol, late-night romance or drinking illegal alcohol while being romantic late at night. Of course, Lamb aren’t like most people. So maybe we shouldn’t be surprised that the Manchester trip-hop duo’s latest preview of their upcoming album The Secret of Letting Go is basically a sunny, upbeat affair with a Stomp-y percussive groove. What you drink is your business. SAYS THE PRESS RELEASE: “We made the Moonshine video out in a secret location in Maharashtra, India. The song is about first sparks of love in a heart that had forgotten what that felt like and was very much inspired by being in that part of the world where the sickle moon lies on its back, instead of sitting up on its side as it does in the west. Somehow this aspect of the moon became a symbol of new beginnings and new love; the shimmering, tingling of endless potential. The moon really does shine differently out there!” Shine on:

5 You know what they say: You can’t make old friends. But you can write songs and make videos about them — as singer-songwriter Sunx (a.k.a. Morten Winter Nielsen of Treefight for Sunlight) does on Dude, a tender piano-ballad tribute to his childhood friend and bandmate. Awwwwww. SAYS THE PRESS RELEASE: “I wrote this song in a period when I got up every morning at 5am to go to the studio and write music. I sat down by the piano and came to think of Mathias from my band’s smile and how happy it always makes me to see that smile. And how much I missed him. It was the first song I instinctively knew that i had to do on my own, without the band.” Hug it out, dudes:

6 Have you met Lydia? No, not the character from Breaking Bad. Or the one from The Walking Dead. Or even the one from the original Marx Brothers song. This Lydia is electro-pop artist Lydia Ainsworth. And with the L.A.-based Torontonian’s self-produced third album Phantom Forest due later this spring — and the lyric video for her beguiling and lightly hallucinogenic single Tell Me I Exist being unveiled right here, right now — there’s no better time to make her acquaintance. SAYS THE PRESS RELEASE: “Phantom Forest is a beautiful, vast collection that mixes the historical and the hands on, with hooks about the apocalypse and people obsessively using face-recognition software to see what paintings their face match with, in search of some kind of connection. It’s a journey that holds up to close listening (and lyric reading) and to dance floors, but that can also exist on a purely emotional plane. In all cases, it asks that you listen, and take some kind of action.” Please allow her to introduce herself: