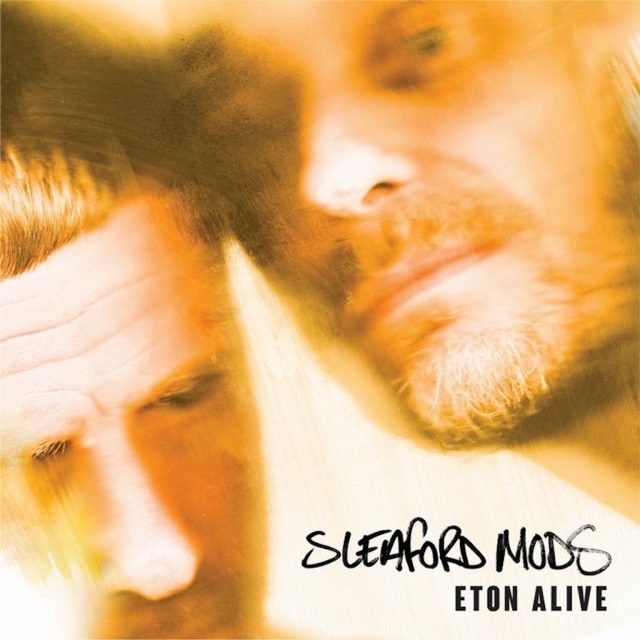 There’s no success like failure. Bob Dylan said that. But Sleaford Mods lived it. When jabbering frontman Jason Williamson and bare-bones beatmaker Andrew Fearn gate-crashed the scene several years ago, they were like an open wound: Raw and angry, nasty and messy. And bloody brilliant. That was mostly down to Williamson, who took the piss out of everyone and everything with an expletive-laden mish-mash of complaints, insults, dirty jokes, Nottingham slang and cultural references that flew over your head like pint glasses in a pub brawl. His verbal torrent dovetailed splendidly with Fearn’s primal drumbeats, synth presets, chugging basslines and one-finger melodies. Impudent, invigorating and instantly polarizing, they were a band you either loved or hated. And they didn’t care either way. But that was then and this is now. Three studio albums and much unexpected success later, they’re in danger of becoming too good for their own good on Eton Alive. On too many of these 12 cuts, Williamson’s lyrics are more serious and thoughtful, delivered in more measured and melodic tones. Jokes and jabs haven’t vanished — “Graham Coxon looks like a left-wing Boris Johnson,” he cracks at one point — but they’re not as stinging and sharp as before. On a couple of songs, he even half-sings. Fearn is also becoming dangerously capable, crafting richer and better-sounding tracks with stronger melodies, complicated arrangements and slower tempos. Granted, we all have to grow up sometime. And there’s still nobody quite like Sleaford Mods out there. But listening to Eton Alive, you almost wish they’d fail — if only so they have something to galvanize them again.