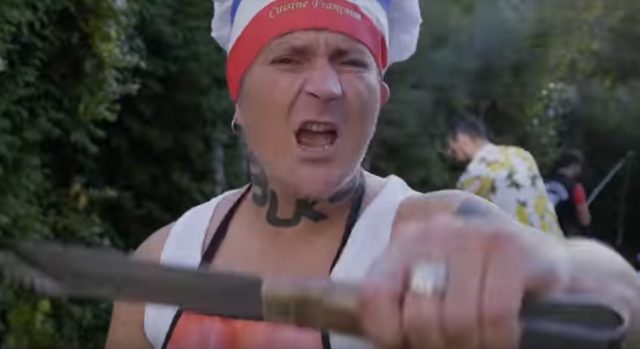 Full Throttle Baby dumb it down, Rosalyn comes to the rescue and Victory Chimes spin to win in today’s Roundup. Come on, big money! No whammies! No whammies!

1 | Some videos are works of art — graceful, beautiful, subtle and thoughtful. This is not one of them. This, my faithful readers, is Beer Hunt, the gleefully stupid single from Rock ’n’ Brawl, the debut album from French headbangers Full Throttle Baby. For some reason, the video was posted on Halloween, but they just got around to promoting it today. Because, you know, stupid. SEZ THE PRESS RELEASE: “Full Throttle Baby, it’s rock, sweat & footwork. The Rock ‘n’ Brawl takes shape! Four members, cutting riffs, tireless energy: all in the urgency. The perfect stuff for perfect brawl.” I couldn’t have said it any better. Go ahead, watch it. You know you shouldn’t — but you will.

2 | Want to wash the taste of Beer Hunt out of your mouth, brain, memory, soul and life in general? That was a rhetorical question: I know you do. And here’s the perfect palate cleanser: The ice cream-centric video for Single Mother, the delicately beautiful title track of acoustic slocore outfit Rosalyn’s new EP. SEZ THE PRESS RELEASE: “Rosalyn was born right after the release of Heiligenstadt, The View Electrical’s sophomore album. Frédéric Aellen (vocals/guitar) immediately felt the urge to start something different, more acoustic and intimistic, closely related to his early demos.” Intimistic? Easy for you to say:

3 | In the words of the poet laureate David Clayton-Thomas: What goes up must come down / Spinnin’ wheel got to go ’round. Canadian band Victory Chimes know what he’s talking about: Their new album Spinning Wheel has finally come around — and here’s the cinematic video from the gorgeously (and fittingly) chiming cut 40 Days on the Bridge. SEZ THE PRESS RELEASE: “The synth psych-soundscape textures and long-playing experimental song structures have turned a few heads in the local scene. With this new collection of songs, the band is stepping into their own unique stride whilst blowing the minds of children throughout the universe along the way.” Do it for the kids: