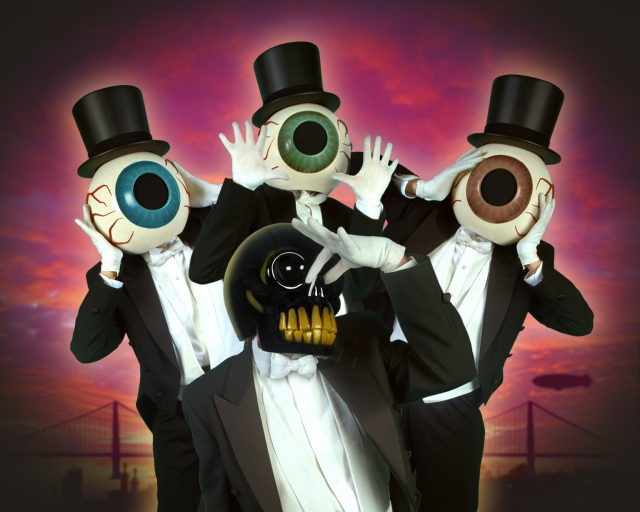 Hardy Fox of The Residents has died of brain cancer at the age of 73, according to a statement from the mysterious San Francisco art-rock collective.

“It is with great sorrow and regret that The Cryptic Corporation announces the passing of longtime associate, Hardy Fox,” the band wrote. “As president of the corporation from 1982-2016, the company benefited from Hardy’s instinct for leadership and direction, but his true value came from his longtime association with The Residents. As the group’s producer, engineer, as well as collaborator on much of their material, Fox’s influence on The Residents was indelible; despite any formal training, his musicality was nevertheless unique, highly refined and prolific.

“Blessed with a vital sense of aesthetics, a keen ear, and an exquisite love of the absurd, Hardy’s smiling face was a constant source of joy to those around him. He will be missed.”

Fox had reportedly retired from the group in 2015, but continued composing for them until this year. Back when they were touring Canada in 2011, I had the opportunity to interview him. Here’s how it went:

The Residents may look like they’re from another planet — but they’re really just down-to-earth joes, an insider claims.

“In real life, they’re actually sort of boring,” laughs group spokesman Hardy Fox in his gentle southern accent. “As The Residents, they’re magical. But the mythology is bigger than the people.”

That’s no accident. Over their freaky four-decade career, the prolific San Francisco-area oddballs — best known for the giant-eyeball helmets they sometimes sport — have crafted and cultivated their enigmatic image using the same witty ingenuity they bring to their spooky soundscapes and innovative multi-media works. The musicians’ true identities have never been revealed. They’ve never been photographed out of costume. And they don’t do interviews — unless the 60-something Fox really is their main songwriter as rumoured. But he ain’t telling.

Here’s what we do know: Their current musical lineup — who go by the names Randy, Chuck and Bob — is crossing Canada from Vancouver to Montreal this month on the Talking Light Tour, a typically weird multi-media production that examines life and death through ghost stories, creepy tales and The Residents’ ominous, haunting music.

As the trio prepare to scare Canada, the sly Fox led us on a merry chase while discussing the group’s history and mystery. The highlights:

If I’ve got my facts right — always a big if with you guys — you’ve been involved since Day 1.
Actually, I was involved before Day 1. This group goes back to childhood. You know how it is — you hang out with people you know and try to be helpful, and before you know it, you’ve been sucked into things. I didn’t anticipate it would become a lifelong career. And it isn’t going anywhere.

Depending on which story you believe, you’re the band’s manager, producer or songwriter. Can you clarify that?
I probably can. Originally, I was turning on tape recorders and things, helping out with recordings before they got better people. So people thought I was the engineer. Then I got involved in promotion and publicity and making calls on their behalf, and before you know it, people called me their manager. Even though I don’t see myself that way. I’m really just part of the group.

Why don’t The Residents do interviews?
When they started, they sat down and wrote out rules about what their group should be. Not what their band should be. They didn’t see themselves as a band, or even want to be a band. They thought bands were creepy things. A band implies each person is oriented toward an instrument. They wanted to be oriented toward ideas. Everyone in the group had to be an idea person. They didn’t have to have any skill, but they needed ideas. Another rule was that no one should speak for the group. They would have nothing to say; their work would speak for itself.

Are there disadvantages to their anonymity?
It’s double-edged, like anything. There’s a very large number of people who don’t take them seriously because of it. Anybody in show business usually wants to get as much attention as possible. We all know that. But they feel it’s served them well because it prevents competition within the group by people trying to get attention.

The band has always embraced new technology, from video to CD-ROM to podcasting. Where are they heading next?
They’re quite fascinated by the whole mobile world — iPhones and apps. Their point of view is that bands and songs are passe; apps are the new songs.

The old eyeball masks are so iconic. Are fans disappointed when the band isn’t wearing them and is that problematic?
One of their very strong policies is that the people do The Residents, The Residents do not do them. You can’t ever get in a situation where you let what you’ve created start creating you back.

How much longer can The Residents go on? And will we even know when they stop or will they just be replaced?
Probably what will happen is that they’ll stop and no one will know because there’s such a huge backlog of recorded material. It’ll be like Jimi Hendrix; new albums will just keep coming out.