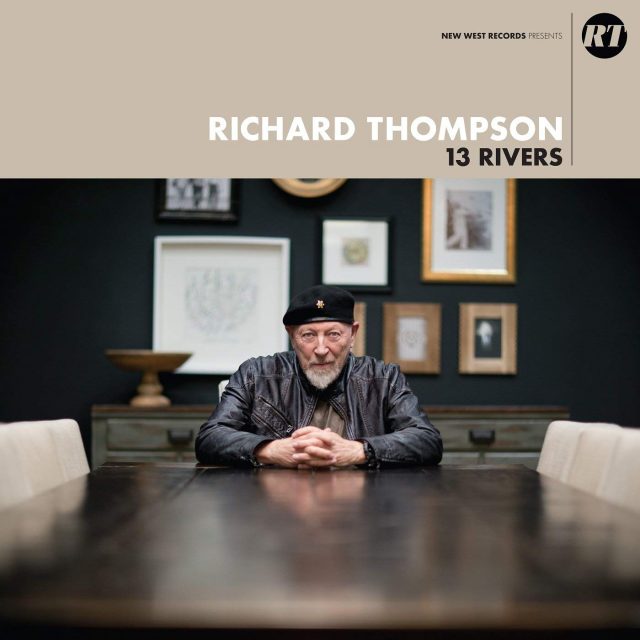 Richard Thompson is at his best when he’s at his worst. That’s patently obvious to anyone who’s spent quality time with Shoot Out the Lights, his beautifully bleak 1982 collaboration with about-to-be-ex-wife Linda Thompson. And it’s equally unmistakable as soon as he opens his mouth on The Storm Won’t Come, the metaphorical first track on his 18th solo set 13 Rivers. “I’m longing for a storm to blow through town / And blow these sad old buildings down,” the 69-year-old singer and guitar hero croons in dark Nick Cave tones over a thumping tom-tom beat. “Fire to burn what fire may / And rain to wash it all away.” What ‘it’ is remains unclear: Thompson has admitted the album was written during a difficult personal time but has declined to give details — though there’s no shortage of lyrics here about heartbreak, alienation, betrayal, destruction and revenge. So read between the lines if you want. Really, all you need to know is that Thompson is shooting out the lights again. But this time, he’s firing on all cylinders. From stem to stern, the self-produced 13 Rivers is his loudest, noisiest, tensest and angriest work in decades. And likely his most cathartic. Coming hard on the heels of several acoustic albums, these 13 songs find Thompson plugging in his guitar, cranking up his amp, counting in the band and letting ’er rip. Of course, this is Thompson we’re talking about, so even at the height of his fury, he never loses touch with his British reserve and self-control. Every song, every riff, every chord change — and of course, every note of every stunningly brilliant solo — is impeccably crafted and exquisitely delivered with his usual sophistication, craftsmanship and restraint. And while there’s plenty of searing rock, blues and post-punk driving these tunes, they’re still coloured with the folk and Celtic elements that have always been a key component in his work. So ultimately, 13 Rivers definitely marks a high point for Thompson fans. If not for the man himself.