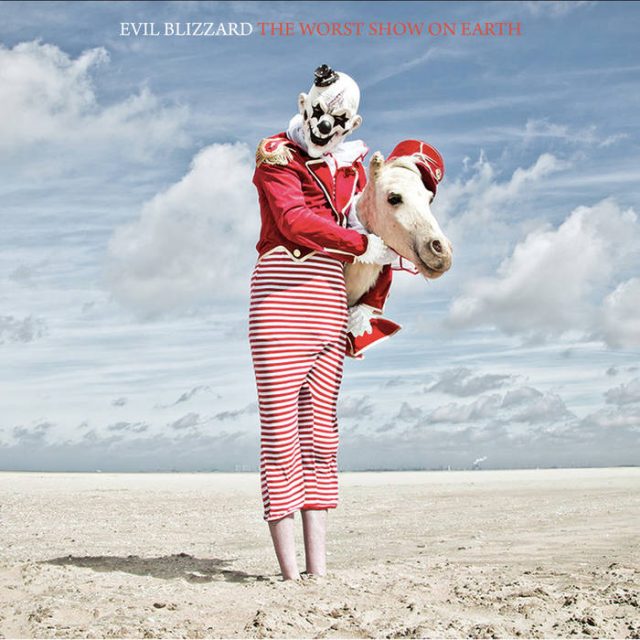 It’s all about that bass, baby. And that bad, bad craziness. If you haven’t already had the perverse pleasure, it’s high time you braced yourself for the one and only Evil Blizzard, easily one of the most gleefully demented outfits ever to hail from the green and pleasant land of North West England. Or from anywhere, really. Unless you happen to know of another band with four (yes, four!) bassists, a singing drummer and a synth player — all rocking bizarre, unsettling rubber masks in a self-described “Victorian freak show.” Yeah, didn’t think so. But don’t let their low-rent pig-and-pony parade distract you from the horribly real prize: The undeniable magnificence and cranium-crushing might of their cheekily handled third album The Worst Show on Earth. Not surprisingly, these tumultuous tracks boast the biggest bottom since Spinal Tap talked mud flaps (and whose girl’s got ’em). But fittingly, they also live up to immortal words of Derek Smalls and co.: “The bigger the cushion, the sweeter the pushin’.” Assuming, of course, your tastes run to the same brand of hard-driving, heavily hypnotizing doom-groove thunder-darkness propagated by the likes of Sabbath, Hawkwind and Killing Joke. But brown sounds aren’t the only flavour in their savoury special sauce. You’ve also got dashes of Krautrock and dub. Brilliantly simple stadium-chant earworms (“Who are we? / We are we / Who are you? / You are you”). High-velocity, big-lunged belting reminiscent of one John Lydon and one Jaz Coleman. And, most surprising of all: Way more prominent, memorable melodies than you’d ever anticipate from a band fuelled by 16 bass strings. So what do they do with it all? They shove it in a blast furnace with some organ meats, bake it into a blood-pudding pie and ram it home ’til you squeal like a pig. ’Tis someone’s lucky bun day. You know what I mean.